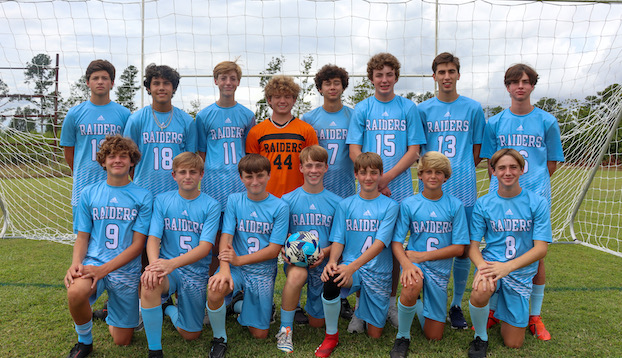 The Raiders were down 3-0 at halftime, but senior Devin Cadle stepped up in the second, scoring all three Pungo goals to send the game into overtime.

NCISAA overtime rules are two five-minute halves, golden goal. Neither team was able to score in OT, so penalty kicks decided the game.

Jay Askew continued to be a brick wall in the goal, blocking the first two PK’s attempted by Ridgecroft.

Gabe Niederhauser scored on the Raiders first PK, then Ridgecroft evened it on their third attempt.

Cadle answered with his 36th goal immediately to put PCA up 2–1.

The Rams next attempt sailed over the goal and Davis Lee was up to potentially win the game on one kick.

He missed right over the top of the goal and so it all came down to Ridgecroft best player, Junior Justin Peterson and the Raiders keeper, Jay Askew.

Peterson went back to kick, Askew shifted to his right and the kick sailed over the goal sending the Raiders storming onto the field to celebrate their first ever TIC regular season championship and undefeated conference season. PCA is 9-2 and 6-0 in league play.

The TIC tournament is scheduled for next week with the NCISAA state tournaments starting Oct. 19.