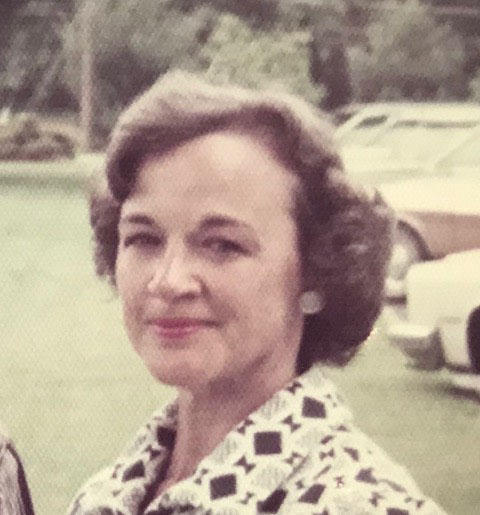 (Laura) Mary Edna Trueblood Bell passed away on October 6, 2021 at the age of 97. She was born to Julian Moore Trueblood and Thelma Leggete Trueblood in Washington, DC. She graduated from McKinley Technical High School in 1936 and later from Strayer Business College.

Laura married Dr. Franklin Durant Bell in 1944 and they had four sons. Durant predeceased her in October 2020. Laura is survived by her four sons and their wives: Steve and Jackie Bell of Greensboro, NC, Jim Bell and Marcy Kelley of Bethesda, MD, Michael and Jay Bell of Atlanta, GA, and David and Alison Bell of Dunedin, FL. She is also survived by 9 grandchildren and 10 great grandchildren. Her brothers, Julian and Neal Trueblood, and sisters, Leggete Tripp and Minnie Sawyer all of Washington, NC predeceased her.

Laura was a loving and dedicated wife and mother to her family and gave up her career to take care of her four boys. Her hobbies included arranging flowers for her church, gardening, cooking, hiking, tennis, playing the piano, and bridge. She enjoyed traveling with her husband. Often her sons and their wives accompanied them on these exciting trips to Europe, Africa, Asia, Central and South America, the Mediterranean, and around the US.

From 1943 to 1944, Laura worked for the Citizens Committee for Non-defense Expenditures in Washington, DC where she participated in the research and preparation of the first reference book on U.S. Government departments and agencies.

After residing in Washington, NC and later Germany, Laura and her family moved to Pennsylvania in 1954 while Durant attended the University of Pennsylvania School of Oral Surgery and completed his internship and residency. In 1957, the family moved to Raleigh, NC where Durant opened his oral surgery practice. While living in Raleigh, she was president of the West Raleigh Women’s Club. She also attended Meredith College. Laura was very active at St. Michaels Church in Raleigh, attended religious study classes and enjoyed reading the bible. They lived in Raleigh until 1992 when they retired to Washington, NC. In 2005, Laura and Durant moved to the Galloway Ridge Continuing Care Retirement Community near Chapel Hill, NC.