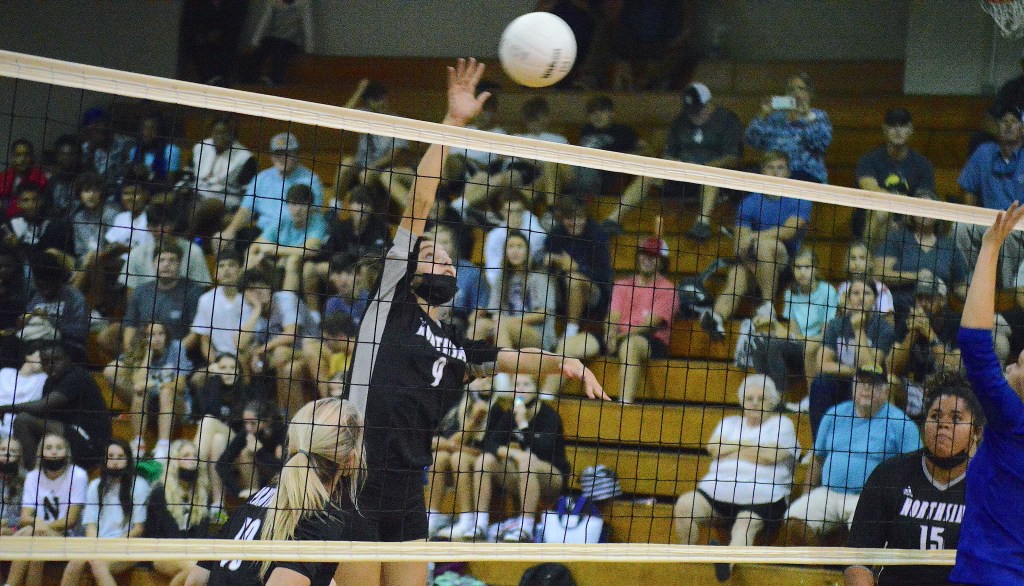 The Northside volleyball team got a look at what lies ahead Tuesday night as they hosted Camden County, the top-ranked team in 2A.

The Bruins entered the match undefeated at 16-0 and had only lost one set all season. They left 17-0 after a 3-0 victory over the Panthers, who are 15-2 and ranked second in 1A.

“Camden County is the only team who has beaten us all year and we played better this time,” Northside coach Michelle Leathers said. “They are a very strong team and that’s why we wanted to play them twice, so we are ready for the playoffs.”

Northside led at the midway point of the first and second sets, then late in the third before the Bruins rallied behind strong serving and several high-velocity kills to close out the match.

“I think we are just as good as they are, but we have to communicate better on the court,” sophomore Hannah Black said. “We have to let each other know where the ball is all the time and who is going to hit it back.”

The Panthers are 7-0 in league play with two matches left, Tuesday at Jones Sr. and the following Tuesday at home against Pamlico County.

The latest RPI rankings have them second in 1A East behind Perquimans, in solid contention for home court advantage deep into the playoffs.

“It’s better to play harder opponents, because we see what it takes to be really good,” senior Paige Sawyer said. “We should have won at least one set, if not the match, so this will make us work harder to get ready for the playoffs.”

The state association is using the Ratings Percentage Index as part of the playoff seeding process in football, volleyball and soccer for the first time this fall. 32 teams make up the East bracket in all three sports. Here’s how the local teams stand as the regular season winds down.

Football: The Pam Pack was 20th in 2A before its win Tuesday at Northampton. WHS played at Greene Central Friday night, so the Pack could move up a few notches next week.

The weather-delayed Anchor Bowl has some extra spice Monday as homestanding Southside (5-0) is second in the 1A East standings behind North Moore, while Northside (5-1) is fourth behind Tarboro.

The Panthers have Jones, Lejeune and Pamlico County left, while the Seahawks face Lejeune, East Carteret, Riverside in a make-up game Oct. 26th and Jones.

Soccer: Washington is 12th in 2A at 8-4-1 overall and 5-1 league record with seven matches left, while Southside is seventh at 8-3-1 with five matches left.