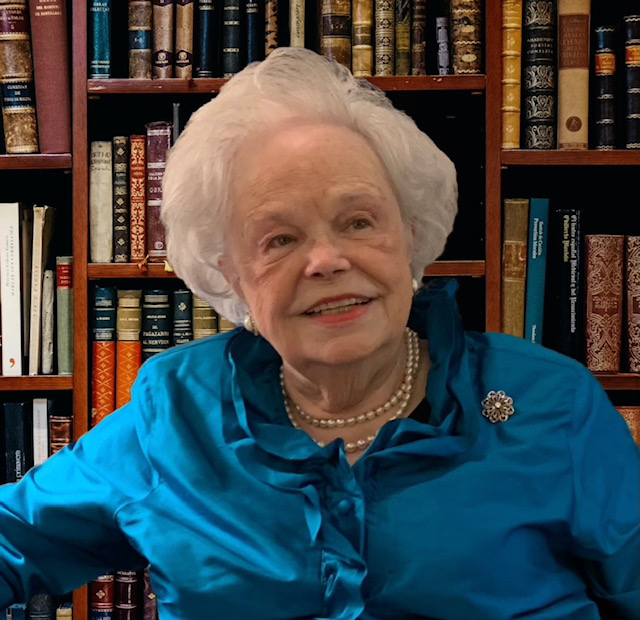 Isabel Blount Carter Worthy, 90, died peacefully at her home in Raleigh, NC on Tuesday, October 5, 2021.
She was born in Washington, NC on November 10, 1930, to Marjorie Blount Hoyt Carter and Henry Clay Carter, III. Throughout her life, she was an irrepressible optimist – a “Pollyanna,” as she liked to call herself – who always looked for the positive in people and in life’s opportunities. She grew up during the Great Depression – surrounded by a loving, extended family in Washington and at Summer Haven alongside the Pamlico River, where she never learned to swim. Instead, she read – voraciously. At age 16, she graduated from Washington High School, where she was valedictorian of her class, literary editor of the Packromak, and a member of the debate team. While in high school she earned the Curved Bar Award, then the highest award for Girl Scouts. She was one of two recipients statewide of a four-year, full college scholarship awarded by Pepsi-Cola Company. At Saint Mary’s Junior College (now Saint Mary’s School) in Raleigh, she won the Niles Medal awarded to the graduate with the highest scholastic average during her tenure at the school. She was presented at the North Carolina Debutante Ball in 1949. In 1951 she received her Bachelor of Arts degree in English from the University of North Carolina at Chapel Hill, and afterwards she taught English and served as a librarian at Bath High School and Washington High School.

None of these early achievements ranked above her focus on her family. In 1954 she married Ford S. Worthy, Jr., whom she had first fallen for as a teenager in Washington, where her family owned and operated J. K. Hoyt’s Department Store less than a block away from his family’s drugstore on West Main Street. She and Ford moved from Washington to Charlotte after he changed careers to take a job with the city mortgage department of The Equitable Life Assurance Society, and several years later they settled down for good in Raleigh, where Ford went to work for J. Willie York, the developer of Cameron Village. After her husband started his own company, Worthy & Wachtel, Inc., Isabel took accounting courses at N.C. State University, becoming an early adopter of computers and then-cutting edge accounting software, which she used to support her husband’s different business ventures.

Isabel devoted herself to raising her four children, Ford, Isabel, Carter and Marty. She was an inspiring presence in every corner of their lives, teaching them to believe they could accomplish anything they set their minds to, encouraging them from the bleachers and on the stage, and supporting them through the many challenges of growing up. As one of the “founding mothers” of the Alamance Drive neighborhood, she also nurtured her children’s friends, who were often in and out of the Worthy home as if it were their own. Her famous “Cookie Day” – a practically all-day affair of decorating Christmas cookies with colorful icing and other trimmings – became a treasured holiday memory for the neighborhood children. Later, she carried on this same tradition with her nine grandchildren. In addition, she was a Girl Scout leader and she served on a variety of community committees and boards, including the Raleigh Little Theater, the Junior League of Raleigh and the National Society of the Colonial Dames of America. She was active as a parishioner at St. Michael’s Episcopal Church, and she also attended services at St. Francis by the Sea in Salter Path, NC and Saint Peter’s Episcopal Church in Washington, NC.

She loved nothing more than spending time with her family and her friends – through travel, bridge, cruises on a succession of “Seaworthy” boats, holiday dinners, tailgate get-togethers before Carolina football games, and gatherings of a legion of social clubs. With her husband, she delighted in engaging with people of all ages at the Carolina Country Club and the Washington Yacht & Country Club, and with the High Noon Book Club and The Assembly, among her favorite groups. For her, a highlight of any day at the beach was convening at the “sittum,” the deck overlooking the Atlantic Ocean where she and Ford and their Beachwalk friends could be found raising a glass just before sundown. She also loved settling in with a good book – while surrounded by piles of other books waiting to be read. To her grandchildren she was known as The Book Lady, from whom they could always count on a specially chosen book for special occasions.

She was predeceased by her parents, her brother-in-law David Fowle, her sister-in-law Marion Worthy, and her nephew Paul Freeman.

The Worthy family is grateful for the support provided by Transitions LifeCare, and for the devoted care given by Martha Davis and her team, with special thanks to Mia Smith and Kathy Bryant for their compassionate assistance over the past year.

A memorial service was held at St. Michael’s Episcopal Church on Friday, October 8, 2021, after which the family welcomed guests at a reception at the home of Carter Worthy and Tom Hester in Raleigh. A private burial at Oakwood Cemetery in Raleigh preceded the memorial service.

In lieu of flowers, memorial gifts may be made to Saint Mary’s School, 900 Hillsborough Street, Raleigh, NC 27603.