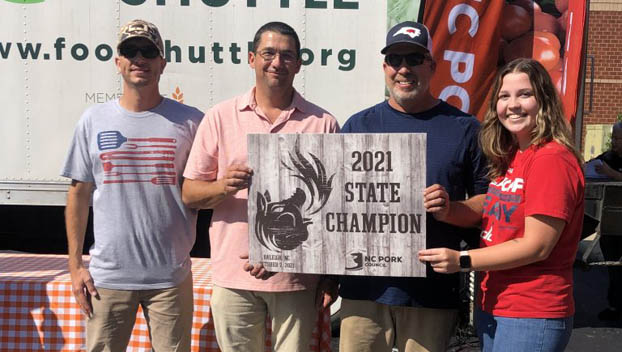 Three weeks after the death of his father, Washington resident Wesley Bowers set out to compete in his memory at the Whole Hog Barbecue Series State Championship in Raleigh last weekend.

That made it all the more special when a panel of judges named Bowers and his team, Gettin’ Piggy With It, the 2021 Whole Hog Barbecue State Champion.

“It feels awesome,” Bowers said. “The guys I was cooking against are the absolute best in the state. It’s an honor to win.”

Bowers and his team earned $2,000 in cash and a championship ring. The other team members are his daughter Shayna Bowers, Bruce Lee and Marlow James.

The championship event is the finale of a series of barbecue cook-offs held throughout the state. The competitions are held using Carolina Pork Council-sanctioned rules. The winner of each local cook-off earns a shot at the state championship.

Bowers has been cooking for approximately 11 years, and he’s competed in the Whole Hog State Championship series seven times. This was his first championship win.

Chefs arrived on Friday afternoon to set up their cooking stations and camps. They received their hogs at around 8 p.m. They got to work prepping their pig for an entire night of cooking before judging began at 8 a.m. on Saturday morning.

The event was closed to the public due to the COVID-19 pandemic, so the N.C. Pork Council said 797 pounds of pork was donated to the local Inter-Faith Food Shuttle to be used in their feeding programs.

Bowers said “very crispy skin and great moisture,” as well as a good homemade sauce, were the keys to producing a championship-winning hog.

Bowers first got into barbecuing when he borrowed his grandfather’s equipment.

“He though it would be neat to try to compete,” Bowers recalled. “We’d finish last and he’d tell me it was the best pig there.”