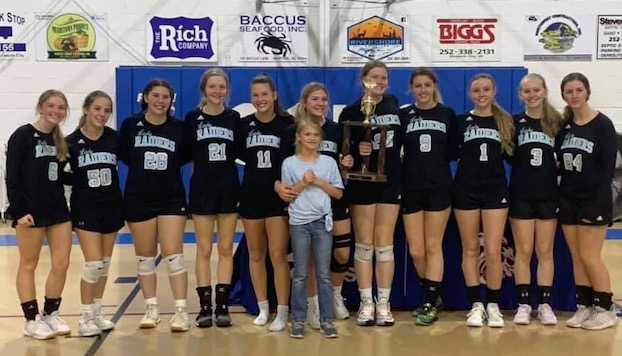 The Lady Raiders swept Ridgecroft, 3-0, in the semi-finals, then claimed the title with a 3-1 victory over The Albemarle School. PCA has won six of the last seven conference volleyball tournament championships.

Junior hitter Reagan Stoop, holding the trophy, was named player of the year for the third straight season. Abbey Cutler and Audrey Gibbs joined her on the All-Conference team. Stoop also earned tournament MVP honors, while Gibbs and Haley Elliott were on the All-Tournament team. The Lady Raiders (17-3) are the top seed in the NCISAA 1A state tournament and drew a bye into Saturday’s quarterfinals. They will host an opponent to be determined at 2 p.m.