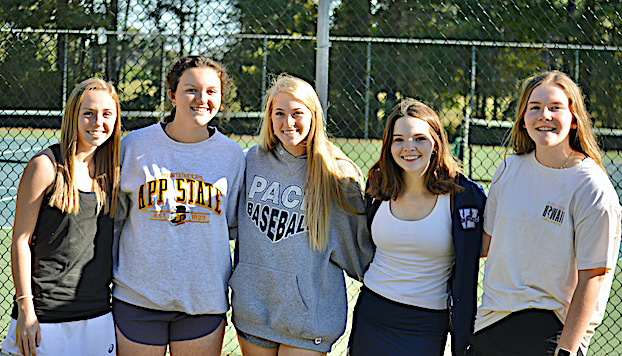 High school tennis is an individual sport, but also a team competition, so it makes sense to have state championships in both. However, it can get confusing with both are contested in the same week.

The Washington High School girls tennis team finished second in Eastern Plains Conference action and drew the 12th seed in the team state tournament that starts this week, while five individuals will compete in the East regional over the weekend at Greene Central High School in Snow Hill.

It will be a hectic week, but I think our girls are ready,” WHS coach Miranda Whitley said, whose team finished 11-4. “We play at East Duplin in the first round, so we’ll treat it like any other team match.”

“Our team likes to have fun and they enjoy being around each other, which has helped us win tough matches,” Whitley said. “They also know when to be serious and all of them have become more consistent. There’s a good group dynamic, so we’ll see what happens.”

The individual regional tournament qualifying is based on results from the conference meet.

Laci Campbell won three of her four matches to advance, while the doubles teams of Olivia Paszt/Katherine Pollock and Abby Lewis/Ana Roberson were second and fourth.

“Doubles pairings are tricky sometimes, but ours fell into place from the beginning,” Whitely said. “They communicate well with each other and are on the same page.”

The players are ready for their season to continue, but their approach is the same.

“Katherine and I trust each other and know where the other is on the court,” Paszt said. “We know the other will be there to hit it back and we pick up things from the opponent that we can use during the match.”

Campbell said singles is different, but the objective is the same.

“It’s all on you when you are out there by yourself,” she explained. “My first serve is pretty hard, so it’s good when it’s working. I usually return pretty well and my movement has improved. We are all excited to play this weekend.”

Each must win two matches Friday to advance to the state tournament. Saturday’s matches are for seeding purposes.

Golf-The Pam Pack girls golf team qualified for the East regional for the third year in a row and finished seventh in the event held at the Goldsboro Municipal Golf Course.

Senior Anna Shadle and junior Lily Davis made their second appearance, while junior Elizabeth Manning made her second. Davis finished 31st overall with a 109.

“Our program is on the upswing and I’m proud of our girls,” coach Lane Raper said. “It’s the first time a Washington team has made the regional three straight years and we’re looking forward to keeping it going.”

Soccer-the Pam Pack gave up a goal in the first 20 seconds, then battled back for a 2-2 tie, before losing to Greene Central, 3-2, Monday night.

“They are one of the best teams in 2A and they beat us twice, so congratulations to them,” coach Jim Kozuch said. “It was disappointing to give up a goal so early, but I’m proud of the way we battled back. We need to win our last two matches to get at least one home game in the playoffs, so we will focus on that.”