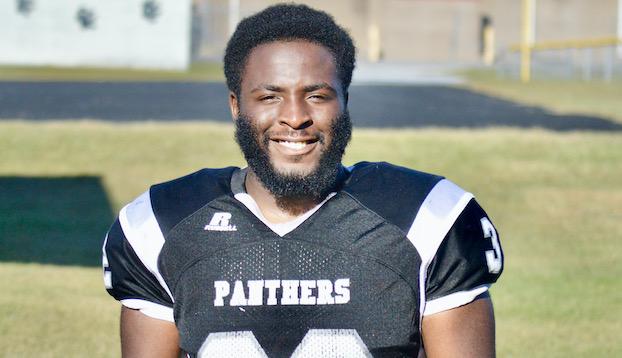 Terry Columbus was part of the Panthers football team that played for the 1A state title in Raleigh in the spring. (Steve Barnes/Washington Daily News)

Belhaven native Terry Columbus plays guard and defensive tackle on the Northside football team, wrestles in the 190 lb. weight class and is a baseball center fielder. He shares his insight on several topics with High Five.

Terry: It was the greatest feeling in the world to run through that tunnel and on to the field at Carter-Finley Stadium and we want to experience it again. We understand how hard it is to get there and we’ve tried to work hard in every practice to get back. We all get along great and are super-motivated to finish strong so we can.

Terry; Definitely football, because I’ve always loved to play. My mom signed me up to play in the Belhaven rec league when I was five or six and I haven’t stopped. My first coach ran us to death, but I loved it. I played in one Washington Youth Football League Super Bowl with the Belhaven Bulldogs, played at Northeast Elementary and now here. There’s no better feeling than being on the field competing with my teammates.

Terry: I like to work out at the gym and I like to fish. My favorite spot is in the breakwater in Belhaven and I also like to fish in Hyde County. The biggest one I’ve ever caught was a 26-inch Rockfish two summers ago in Belhaven.

Terry: My dad plays the piano and guitar. We were sitting on the porch a few years ago and he showed me how to play acoustic guitar. He plays a lot of blues, but I’m more into country. I also sing almost every day and Luke Combs is my favorite to listen to.