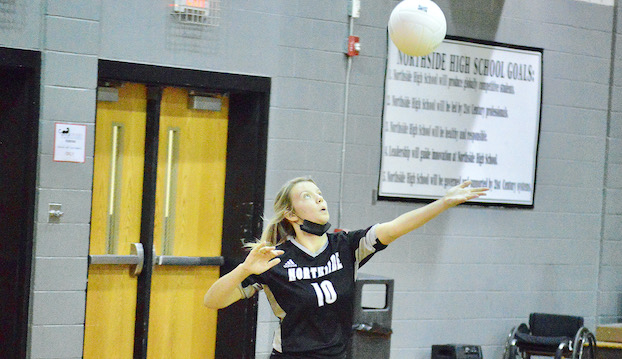 Paige Sawyer has been part of four state tournament teams in volleyball, basketball and softball since transferring from Unity Christian for her junior year. (Steve Barnes/Washington Daily News)

Winning seems to follow Paige Sawyer on whatever floor, court or field she happens to step onto, but don’t expect her to take any credit for it.

The self-effacing senior transferred from Unity Christian in her hometown of Chocowinity to Northside for her junior year, in the middle of the COVID-19 pandemic. Since then, she’s been the setter for two state playoff volleyball teams, the point guard on the Panthers East regional final basketball team and an outfielder-first baseman on the state tournament softball team.

“Everybody thinks I left Unity because of sports, but that’s not true,” Sawyer said. “I want to be an engineer and Northside offered Advanced Placement and Honors classes and also had an early college option. Academics were also first, but sports have turned into a really cool bonus.”

Sawyer has taken at least two college courses at Beaufort County Community College each semester, is a member of the National Honor Society and wants to study civil engineering with a minor in construction management at North Carolina State.

“I’ve always been a tomboy and I loved to build things with Legos when I was younger,” Sawyer said. “My dad (Ivan) has a marine construction company that builds piers and bulkheads. I love the design process and enjoy studying blueprints. I also really like science, so I’m hoping to combine the two.”

For now, she’s focused on designing a successful path through the 1A volleyball state tournament. The Panthers went 10-0 and captured the first conference title in school history, finished 18-2 overall with the losses to the top ranked team in 2A (Camden County) and start the playoffs Saturday at home as the third seed against Ocracoke.

“Paige is the glue that holds our team together,” coach Michelle Leathers said. “She is our setter and it’s up to her to start our offense. If she doesn’t put the ball in the right spot for the hitters, we don’t score. She does that very well and is our floor leader. She knows what I want and communicates it to the team when they can’t hear me. She plays extremely hard and her teammates respect her tremendously.”

6’3 hitter and basketball center Shyanne Buck played with Sawyer at Unity, played without her for a year, then joined her at Northside. No recruiting necessary.

“I just needed to play with my point guard,” Buck said. “I want to play college basketball and she knows how to get the ball to me. Same thing in volleyball. She sets it, I kill it, we score and hopefully win the match. She makes everyone better and I’m looking forward to seeing what we can do on the court this season.”

Sawyer started playing basketball and softball when she was five, but didn’t take up volleyball until she attended Chocowinity Middle School.

“The coach put me at setter and it’s my spot now,” Sawyer said. “It’s my job to know where everyone is supposed to be on the court and where each hitter likes the ball. Shyanne likes it low, but Hannah (Black) wants it higher, so she can jump to get it. The second hit is always mine, no matter where it is. I might have to dive to get it or run out of bounds. It’s the best position because I’m always in the middle of the action.”

As the third seed behind Perquimans and Neuse Charter, the Panthers will be home until at least the semi-finals. Sawyer looks forward to getting started.

“Our students have supported us really well this season,” she said. “Northside is like family, so we expect it to be loud in our gym. It makes it really fun to play when everybody is cheering for you.”