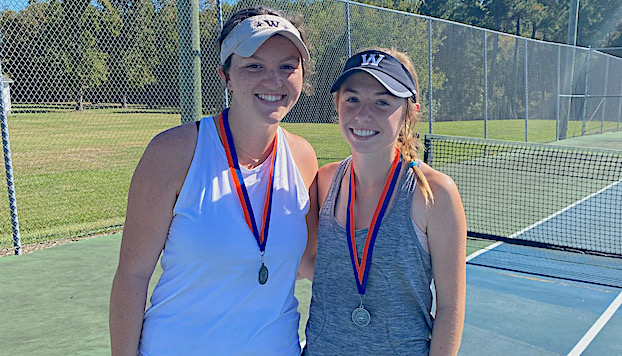 Junior Katherine Pollock (L) and senior Olivia Paszt qualified for the state by finishing second in the 2A East regional. (Contributed photo)

It seems to always come back to Greene Central for the Washington High School girls tennis team.

The Pam Pack finished second to the Rams during the Eastern Plains Conference regular season as Greene Central won its conference for a state-record 28th straight year and also lost to the Rams in the conference tournament finals.

However, the WHS doubles team of senior Olivia Paszt and junior Katherine Pollock defeated one of the Rams duos on their home court to finish second in the 2A individual regional and qualify for the state tournament next weekend in Holly Springs

The WHS duo clinched a state tournament bid with a pair of victories Friday over opponents from Edenton Holmes and North Johnston.

Abby Lewis and Ana Roberson also competed in doubles as did Laci Campbell in singles, but didn’t advance.

Paszt and Pollock await the pairings for the individual tournament, while the team prepares to host Research Triangle High School in the second round Tuesday.