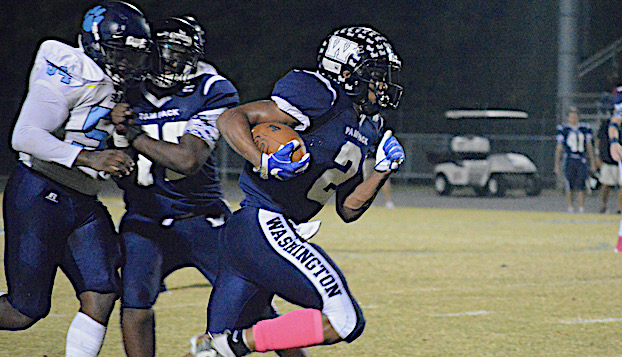 Washington High School’s Terry Moore did a little of everything in Friday’s 42-22 victory over SouthWest Edgecombe on Senior Night. (Steve Barnes/Washington Daily News)

All three Beaufort County teams picked up relatively easy victories Friday on Senior Night. WHS senior Terry Moore led a group of impressive performances on both sides of the ball.

Best of the Rest: The Northside starters played the first half only against an out-manned LeJeune squad. Seven different Panthers scored touchdowns, including senior fullback Mitch Godley, who gained 77 yards on five carries, including a 37-yard scoring jaunt. Northside (8-1) rolled up 229 yards in the first half before the junior varsity finished the game. Fortino Beltran, Marcus Clayton, Noah Manning, Keifer Boyd, Elijah Holloway and Famous Wilson scored the other touchdowns, Wilson’s on his only carry for 25 yards. Chase Tomani was 7-7 on extra-point kicks, Gus Vansant and Holloway recorded sacks and Carson Clinkscales recorded a safety.

Southside: Rain and lightning halted the contest midway through the third quarter for a 28-0 Seahawks win over East Carteret. Tequon (Tater) Moore returned an interception 35 yards for a touchdown, Manvonte DeLoach did the same from 91 yards and Coffield also added an interception. Moore had eight tackles, including one for loss as the defense recorded its second straight shutout and third this season. Jamie Corprew also had a tackle for loss.

Washington: Freshman linebacker Gabe Davis had 14 solo tackles and one assist, Dawson Mitchell had five solos and four assists, while Austin Waters had three of each. Senior Johnathan Richardson ran for 74 yards on just four carries.

The Pam Pack, Panthers and Seahawks are on the road Friday for their final regular season games.