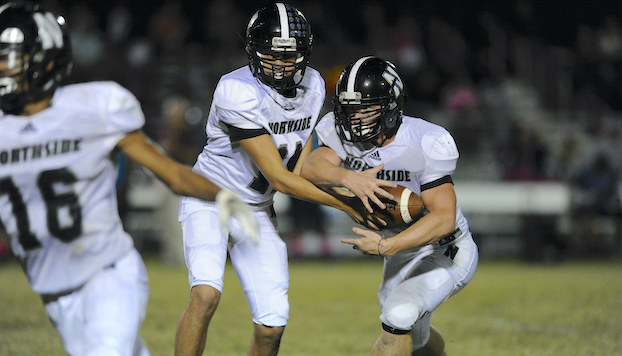 Northside, Southside and Washington ended the best cumulative season for Beaufort County teams in recent years with conference victories on the road.

Godley led a relentless ground attack that rolled up 530 yards and a 63-26 halftime lead. Northside ended the season 9-1 and went 5-0 to claim the league title.

Southside also finished 9-1, 4-1 in the league after a 52-12 rout of Jones Senior. The Seahawks led 30-6 at halftime behind two touchdowns from Tequon (Tater) Moore and one from kenjray Coffield and DJ Joyner that covered 51 yards. Coffield added two more scores in the second half and Keywon Campbell intercepted a pass and scored.

Sothside tallied 400 yards of total offense, including 338 rushing, while limiting Jones Senior to 54 and 129 total.

Washington won its sixth straight game, 47-14 at Ayden-Grifton to finish 8-2 overall and 5-1 in the Eastern Plains 2A Conference. The Pam Pack broke open a 24-14 game after three quarters with 23 points in the fourth to seal the victory.

Senior quarterback Hayes Pippin threw back to back 38-yard scoring passes to Ryan Spruil and Messiah Ebron in the fourth quarter and Johnathan Richardson iced it with a 67-yard scoring run.

Earlier, Terry Moore scored on 15 and three-yard runs and Pippin scored from two yards out.

Spruil also intercepted a pass and recovered a fumble, while Johnathan Carter had an interception.

The county teams will know next week’s playoff opponent when the pairings are announced Saturday.