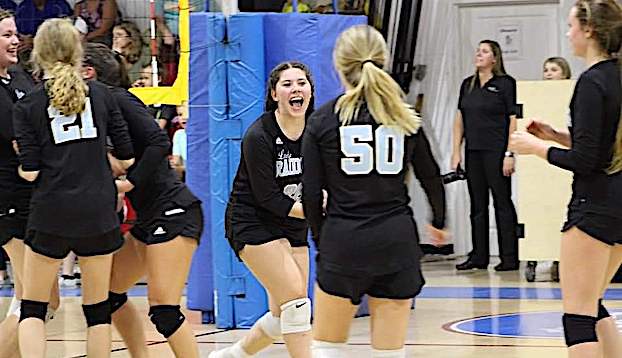 The Pungo Christian Academy girls volleyball team will play for the first state championship in program history against The Albamarle School of Elizabeth City at home Saturday at 4 p.m.

The top-seeded Lady Raiders (19-3) will face the second-seeded Colts (15-3) in the NCISAA 1A title match for the fourth time this season, in search of just the second state championship in school history. The Tar Heel Independent Conference rivals split during the regular season and PCA won the conference tournament title in the most recent meeting two weeks ago.

“They only lost one other match besides the ones against us and they’ve beaten us once, so we know we are in for a fight,” PCA coach Melanie Eddleman said. “It’s great to play in front of our fans and our gym will be packed and loud. It should be a fun experience for everyone.”

They defeated league rival Lawrence Academy in the quarterfinals after having a first round bye, then swept Greenfield, 3-0, Tuesday to advance.

“Reagan (Stoop) is our most powerful hitter and they will be ready to stop her, since they’ve seen her so much,” Eddleman said. “We have several other solid hitters, so that will help. Our girls get along very well off the court, so our chemistry is outstanding and they love our school. It would be the best highlight to win and make history, but Albemarle is very good. It’s a legit state championship match.”

Meanwhile, the Northside Panthers quest for an NCHSAA 1A title ended with a third round loss to Oxford Prep Thursday night at home.