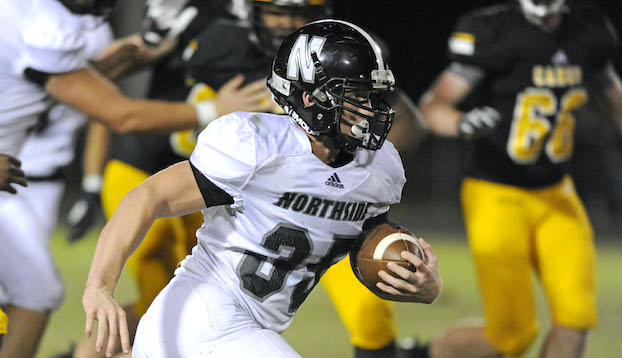 Best of the Rest: Northside: The offensive line of center Braxton Boyd, guards Terry Columbus and Tate Gibbs, tackles Landon Cahoon and John Best along with tight ends Jayvion O’Neal and Caden Cullipher paved the way for Godley’s huge night and were responsible for the Panthers’ 530 yards rushing. Marcus Clayton carried eight times for 98 yards and scored twice, returned a kickoff 55 yards and scored on a 45-yard interception return. Elijah Holloway and three tackles for loss, while Griffin Johnson and Gus Vansant each recovered a fumble. Chase Tomaini was 11-11 on extra- point kicks.

Southside: Kenjray Coffield ran for 111 yards on 10 carries and scored three touchdowns in the Seahawks 52-12 rout of Jones senior to end the season 9-1. Tequon (Tater) Moore had 96 yards rushing and scored twice, had a tackle for loss and a pass deflection. Keywon Campbell returned an interception for a touchdown, Darren Joyner scored on a 51-yard run and Jamie Corprew intercepted a pass as the Southside defense allowed 129 total yards, 54 rushing. The Seahawks are the seventh seed in the 1A playoffs and host South Creek (0-10) Friday in the first round of the playoffs.