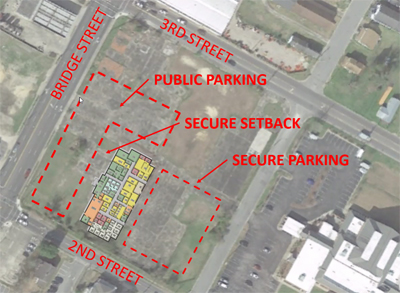 Facing Bridge Street, and bound by Second and Third streets, the police station will be one of the first things people see when they drive into town on U.S. Highway 17 Business. (City of Washington/Moseley Architects)

The Washington City Council on Monday will consider tentatively awarding the construction of the City of Washington Police headquarters to Hudson Brothers Construction Company, as well as approving a $7,836,900 purchase order for that project. The decision is tentative because the Local Government Commission’s approval of the project financing is still needed.

Moseley Architects has already completed the design plans for the project, which will consist of a 17,000-square-foot, one-story brick building, parking, drainage systems and surface restoration. Some demolition is necessary as well.

City Council will also consider authorizing the city to execute a $167,000 agreement with Rivers and Associates for construction administration and resident observation services for the police department project.

Additionally, the agenda includes a public hearing and a vote on whether to accept a proposed financing contract with First bank, under which the city would borrow approximately $6,500,000 for construction of the police station. The proposed loan term is 20 years, with a fixed rate of 1.95%.

The new building will overlook Bridge St., bound by Second, Third and Van Norden streets on the sides and rear.

Other business on the agenda for Monday’s meeting includes:

·      A public hearing followed by a vote on whether to accept the planning board’s recommendation to adopt a request from Stephen Tucker to rezone 54.68 acres on Springs Road from light industrial to residential agricultural. The planning board unanimously coted to recommend approval of the request while noting that it is inconsistent with the city’s Future Land Use Plan.

·      A vote to accept the donation of the 254-acre Lower Tar River Preserve located on the south side of the Tar River. Supporting documents from the city say the parcel could allow for “future eco-tourism opportunities in conjunction with Sound Rivers.”

·      A vote on an economic development incentive request from New Visions Partners, which operates The Mulberry House Brewery. In 2017, the city approved a $500,000 Community Development Block Grant to help rehab the first and fourth floors of the Fowell Building, which is now the location of Mulberry House.  “The project faced several delays due to historic rehab oversight and material availability due to COVID-19,” a supporting document reads. “The CDBG grant is currently open and scheduled to be closed out by the end of the calendar year.” If approved, the economic development incentive would cover grant application and administration from the Mideast Group and electrical underground work in conjunction with the CDBG grant.