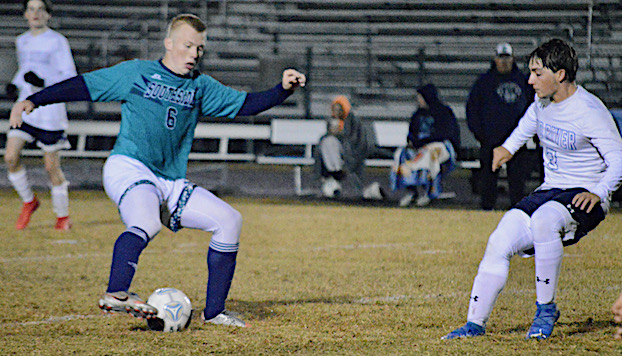 Washington ended their 2A season with a 6-0 loss to the North Carolina School of Science and Math in Durham Monday night.

The 5th seeded Seahawks (14-5-1) were even with the 12th seeded Bobcats (14-7) until a 20-yard high arcing shot from the right side found the upper left side of the net with 20 second left to give Eno River a 2-1 halftime lead.

They made it 3-1 eight minutes into the second half, before junior Jose Ramos drilled a low liner past the goal from straight on at the 27 minute mark to bring the Seahawks within one.

“We had our chances at the end to tie it, but couldn’t convert,” Southside coach Jay Petty said. “Teams from the Triangle are usually very good and Eno fit the description. Their speed made it tough for us to connect our passes and break through the defense like we usually do. We fought hard and I’m proud of our effort. I was worried when we started practice with only 12 guys this summer. More showed up after school started and we had a great year. All but three return, so we have a lot to build on.”

14th seeded Washington couldn’t recover from a 4-0 halftime deficit against the third-seeded Unicorns (15-1-1) to finish the year 14-6-1.

“We ran up against a team that was bigger, faster and stronger,”Pam Pack Jim Kozuch said. “I’m proud of my guys for working hard and steadily improved over the course of the season.We lose three great seniors, but our junior class is awesome and our JV team only lost once. Our returning talent pool is deep and I am excited about next season.”