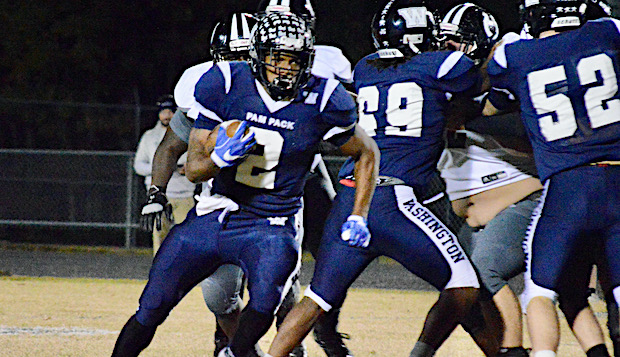 Washington set a school record for points in a season with 507 in 11 games during a 63-36 victory over South Columbus in the 2A playoffs, while the Seahawks routed South Creek, 48-0 in 1A action.

The Pam Pack (9-2) turned a 28-21 second-quarter lead into a 63-28 margin in the fourth period with a 17-yard touchdown pass from Hayes Pippin to Ryan Spruil, Pippin’s one-yard scoring sneak after a 75 yard run from Terry Moore, another Pippin touchdown run of 17 yards and Moore’s seven-yard scamper.

“It’s always good to get a playoff win and move on, so I’m happy with that,” coach Perry Owens said. “I’m proud of our seniors for making great adjustments when we needed them and for breaking the program scoring record. We’ll try to keep it going next week.”

WHS travels to Burlington Cummings for the second round Friday.

Jamie Corprew scored on 22 and 28-yard runs, Tequan (Tater) Moore, normally a running back, threw a 77-yard scoring pass to Manvonte DeLoach on a trick play, then DeLoach returned an interception for a touchdown, giving the Seahawks a 27-0 halftime lead.

Kenjray Coffield had a 39-yard scoring run, the Keywon Campbell ran in from 55 yards. Quarterback Walker Hill hit Coffield with a 61-yard pass for the final touchdown.

Campbell led the rushing attack with 132 yards on four carries.

Northside drew a first round bye and hosts Hobbton in the second round.