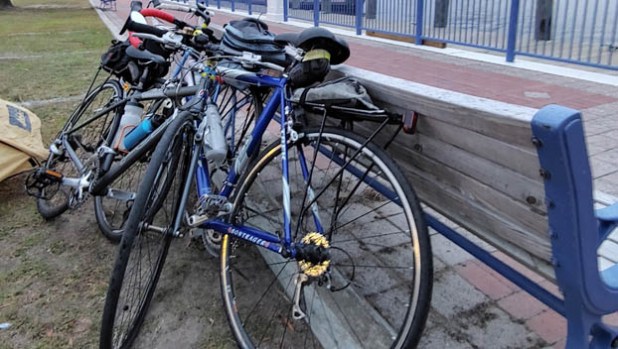 The sturdy among last weekend's riders were still camping out at Mac Hodges Festival Park, "roughing it" within feet of Washington's waterfront. (Karen Thiel) 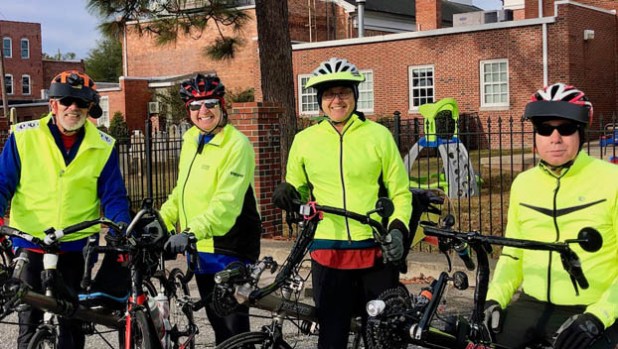 These four cyclists posed for a photo before leaving for Friday's 47-mile ride. From left to right: David Towns and Meta Minton of Lady Lake, Florida, with Suzie Stilwell and Ken Coonley of Columbus, Missouri. The men have been friends since they were children in Illinois. (Karen Thiel)

Close to 900 cyclists proved their love of the sport last weekend, surviving chilly temperatures and challenging winds, as Cycle North Carolina’s Coastal Ride returned to Washington for the sixth time since the ride was created in the early 2000s.

Originally scheduled for April, the coastal ride was postponed because of pandemic-related concerns.

“COVID had everything to do with it,” said event organizer Chip Hofler. He said that last weekend’s “weather deterrent” further minimized what is usually a crowd of 1,500 to 2,000 riders in a typical year.

Hofler said participants came prepared to “dress in layers and shed as you go.” Riders agreed that adding extra layers proved perfect for what Hofler called a “difficult wind” that lasted all weekend.

“We met a bicyclist who was wearing shorts and just about to break out her sandals. We were frozen, but she reminded us that because she’s from Buffalo, New York, she could handle this weather,” said Florida resident Meta Minton.

“Everybody at the ride was just so wonderful. A lot of times the hardcore people can be intimidating, but this was a good mix. It was nice to see people of all ages on bicycles,” said Minton, who is no novice herself, averaging 7,000 miles of Florida-based bicycle riding every year.

The event offered rides for all levels of biking enthusiasts, part of a package including supervised rest stops with snacks and beverages, portable restrooms and showers, camping at Mac Hodges Festival Park, mechanical support, access to the Cycle NC mobile app, and an option for GPS downloads with voice commands for all nine routes offered this year.

Cyclists from nine to 85 years old chose rides from five to 100 miles long. Friday’s routes included stops in Goose Creek, Bath and Belhaven. Treats at Yoder’s, Simply Natural Creamery and Gwendy’s Goodies in Pitt County were on Saturday’s list. Rides to the Griffin Family Farm, Deadwood Theme Park, and Billy Rae’s Truck Repair and Farm on “the northwest side” rounded out the weekend on Sunday.

“And of course there’s the food,” Hofler exclaimed. Sausage wraps at Haw Branch Church of God, quesadillas from Pinetown Fire Department and King Chicken’s biscuits were among participants’ choices, as well as a catered “Coastal Ride Social” at the North Carolina Estuarium

“This is a wonderful way to get together as a family, and great for us because we don’t have to be ‘gonzo’ bikers to do this,” said Vicki Copeland of Colorado, who has accompanied her sister and brother-in-law on an annual bicycle trek for two decades. The three have been riding since one of Copeland’s two sisters was diagnosed with cancer. “It was time to make some memories with each other.  We’ve been from the mountains to the coast since 2004. We have a million war stories, but we mostly laugh and have a really good time. If it hadn’t been for the cancer, we never would have done this.”