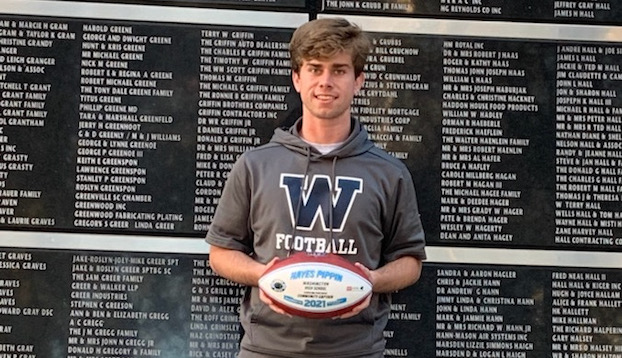 The Carolina Panthers named Washington quarterback Hayes Pippin a community captain along with other players from North and South Carolina. The team recognized all recipients at Sunday’s game against New England. (Contributed photo)

Washington High School senior quarterback Hayes Pippin got a glimpse of what playing on Sunday looks like last weekend in Charlotte.

The Carolina Panthers chose Pippin as one of 10 Community Captains and recognized him and the others in a halftime ceremony during Sunday’s game against New England at Bank of America Stadium.

Criteria for the award included academic and athletic achievement and community service and nominations came through head coaches.

“Hayes checked all the boxes with his resume,” WHS coach Perry Owens said.  “He’s a National Honor Society student, does community service here at school and at Vidant Beaufort Hospital and plays three sports well (football, basketball and baseball). He represents Washington High School and our football program very well and I’m proud that he got recognized for his efforts.”

“I’ve been to Redskins games before, but this was my first time at a Panthers game, so it was really cool. It feels good to be recognized and it’s a great honor. It shows me that football doesn’t have to end in high school. They are the best of the best and it motivates me to keep working for a college opportunity.”

Pippin helped the Pam Pack to the conference championship in the spring and a trip to the East playoff finals.

WHS is 9-2 this fall and the offense set a program record with 506 points in 11 games during Friday’s 63-36 first round win over South Columbus. They travel to Burlington to meet Cummings HS in the second round Friday.

“Our offense can score with anybody, but our defense could be a little tighter, Pippen, who also plays cornerback, said. “We’ll give our best shot and see what happens.”