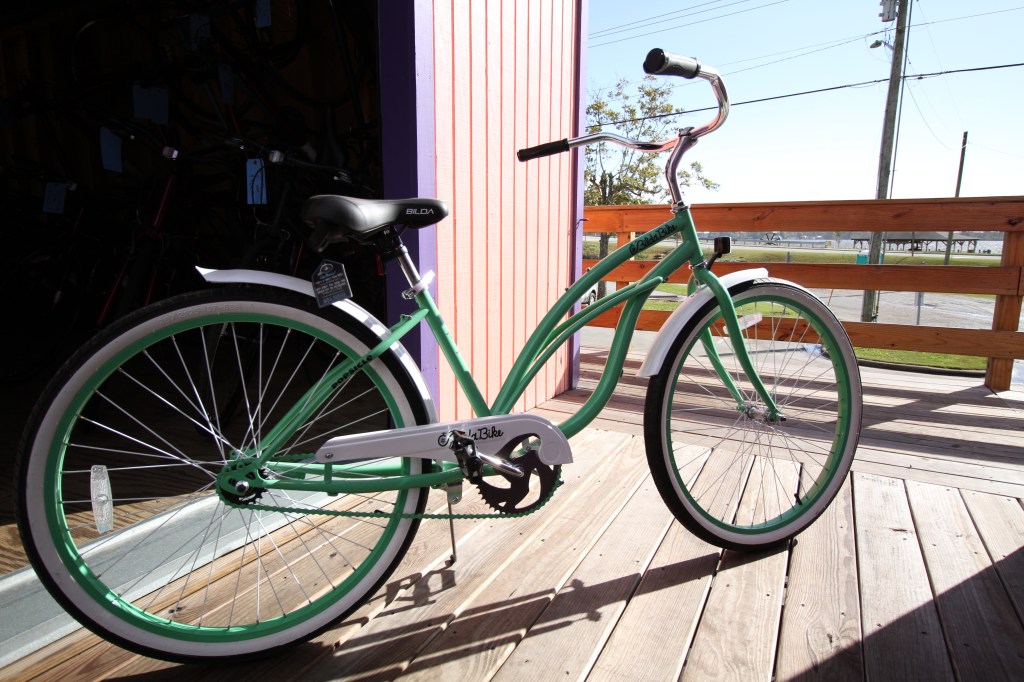 ONE COOL RIDE: Donated by Inner Banks Outfitters in Washington, this Popsicle cruiser by Bilda Bike is up for auction until Nov. 19. (Sound Rivers)

Instead of a penciled-in bid, a click of the mouse will determine the winning bidders at Sound Rivers’ annual silent auction. The grassroots, environmental nonprofit — based in Washington, New Bern and Raleigh — has gone virtual with its auction for a second year running.
“Bidding for Clean Water” went live on Friday morning and is open to the public. For the past 35 years, the auction has been held in conjunction with Sound Rivers’ oyster roast on the grounds of the Washington Civic Center. The pandemic upended the annual tradition last year, and again this year.
“We’re grateful we have the ability to pivot to an online auction, when, for two years in a row, we’ve had to cancel what has always been our biggest fundraiser of the year, and a great event, at that,” said Heather Deck, Sound Rivers’ executive director.
The items for the auction are donated by Sound Rivers’ supporters, and this year’s items up for bid range from work by local artists to outdoor adventures; vacation stays to dining-out packages in Greenville, New Bern and Tarboro.
“We’ve always had quite a selection of items for the auction, but this year, those donating have outdone themselves,” Deck said.
Deck said making the change to virtual fundraisers is how many nonprofits have adjusted to operating during a pandemic.
“The revenue lost from the cancelation of in-person events has provided challenges for our work in 2021 and will do so again in 2022, but, ultimately, the health and wellbeing of our supporters are more important to us,” she said.
The Sound Rivers’ silent auction is open until 5 p.m. Nov. 19. It can be found at https://auctria.events/SRAuction2021.
Founded in 2015 with the merger of two of the state’s oldest grassroots conservation organizations — Neuse Riverkeeper and Pamlico-Tar River foundations — Sound Rivers monitors, protects and advocates for the Neuse River and Tar-Pamlico River watersheds, covering nearly a quarter of North Carolina. With Riverkeepers based in New Bern, Washington and Raleigh, Sound Rivers’ mission is to preserve the health and beauty of the river basins through environmental justice. For more information, visit soundrivers.org.