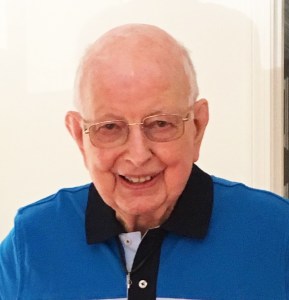 Lewis Eric Tolan, 92, of Simsbury, CT husband of the late Mary Elizabeth (Irvin) Tolan, passed away peacefully on Saturday, November 6, 2021. He was born September 27, 1929 in Belhaven, NC, the son of the late Buel and Bessie (Lewis) Tolan. Lew enjoyed his childhood and school years along the Inner Banks of North Carolina. He was proud to be an Eagle Scout, and knew he was destined to be an engineer at a very young age. He was a graduate of North Carolina State University having received his Bachelors Degree in Mechanical Engineering in 1952 and was a proud veteran of the U.S. Air Force. After serving, he accepted his first job at Ford Motor Company in Detroit MI.
Lew resided in Simsbury with his family for over 55 years. He worshiped at, and served as, an usher at the Simsbury United Methodist Church. He was employed by Stanadyne as a Mechanical Engineer for over 33 years and was a longtime member of the Simsbury Lions Club. He was known around town as the “Pecan Man” because of his involvement in the Annual Simsbury Lions Club Pecan Drive. He was a recipient of the Lions International Melvin Jones Fellow award. Lew enjoyed following professional sports, but was an especially avid fan of the Boston Red Sox.
Lew resided at Belden Forest Court for over 10 years and enjoyed the friendships and participating in activities. He also actively participated in events sponsored by the Simsbury Senior Center. The family would like to thank his two special companions Jackie Myketyn and Elena Meile whose care enabled him to enjoy a high quality of life while living independently.
He is survived by his two dedicated daughters, Karen and Mary Beth Tolan, his son-in-law Paul Cummings, and his grandchildren, Derek and Maeve Cummings whom he adored. He is also survived by his niece, Melanie Irvin of North Carolina, his nephew John and his wife Maxine Garrett of South Carolina and his niece Vickey (Garrett) Purdue of New Mexico. He was predeceased by his older sister, Marie (Tolan) Dominguez, his brothers- in-law Lewis and Royd Irvin, a niece Laurie Verner, and a nephew Lewis Irvin Jr.
Calling hours will be held Wednesday, November 17th from 10:00 AM to 12:00 Noon at the Vincent Funeral Home, 880 Hopmeadow Street in Simsbury, followed by a funeral service at 12:00 Noon. Burial will follow immediately follow at Simsbury Cemetery. In lieu of flowers, memorial donations may be made to the American Cancer Society. Please visit Lew’s Book of Memories at www.vincentfuneralhome.com for online condolences.