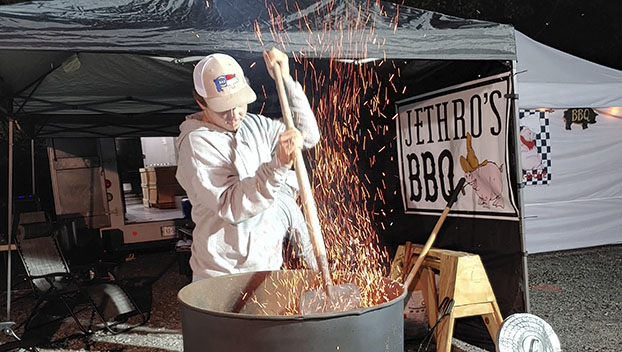 Team helper and Washington resident Jesse Skinner stirred up branches from pecan and oak trees, in order to turn them into the coals that supplied heat for the hog that his team later submitted for judging in the "natural sources" division of this BBQ competition. (Karen Thiel / For the Washington Daily News)

CHOCOWINITY — More than 60 competing teams, 5,000 pounds of pork, 10 chances to take the winner’s plaque, and more praise than anyone has heard in years have all added up to a whole hog BBQ season that has become, to put it in sports language, “one for the record books.” Literally.

Love of the challenge, creativity, sportsmanship and sense of family drew competitors to this year’s Eastern North Carolina BBQ competitions. Longtime BBQ judge Ashley “Brownie” Futrell credits much of the positive change to Evan “Tiny” Woolard, who became president of the Carolina BBQ League just over a year ago.

Futrell said 2020 was “a very different year for whole hog BBQ contests due to the pandemic. When we were finally able to resume, it was tremendous. Tiny has organized several new events in Beaufort County, tremendous improvements. There were more whole hog events in Beaufort County in 2021 than anywhere else in the world,” said Futrell, whose 20-plus years of judging credits include this year’s finals at the World BBQ Championship in Memphis, Tennessee.

Whole hog BBQ competitions are scored on a strict points scale that rates everything from skin crispness, meat moisture and taste levels, overall appearance, meat-to-sauce coordination, and overall condition of the site, including everything from cleanliness to whether the cook was ready for judging. This year’s champions are Washington resident Wesley Bowers, whose “Gettin’ Piggy With It” team in the Gas Division, and Bertie County residents Mark Copeland and Billy Perry’s team “The Pocosin Boys” in the Natural Sources Division.

Copeland, who only this year switched from gas to natural source BBQ techniques, said he and Bowers still cook together with gas when it is not a Carolina BBQ League event. “It’s all a big family. We help each other out. We’ve all got our little BBQ secrets and we don’t tell them, but it’s nothing for us to go help somebody put their pig on the grill or turn them. All they have to do is call for help.’

Bowers, who has competed for a dozen years, took his honors with modesty and gratitude, giving credit to his team and a legacy that now includes his “BBQ family.” He compared it to his own relatives. “Some families are not as close as this BBQ family is. My family is, but not everybody is so blessed. My father passed two weeks before the state championship. I’ve dedicated these last three wins to him and will continue to do so. Sammy Bowers never BBQ’d but he was my biggest fan,” Bowers said.

Copeland credited Woolard with much of this season’s success. “He has done an awesome job working hard to get these events put together,” he said. Woolard was quietly optimistic. “We are a 501c3 nonprofit organization” he said of the Carolina BBQ League, “and we’ve been able to raise more than $60,000 this year for Beaufort County nonprofits. We had five events last year and 10 this year. I’m looking forward to probably 15 in 2022 so we can give away more” Woolard said.