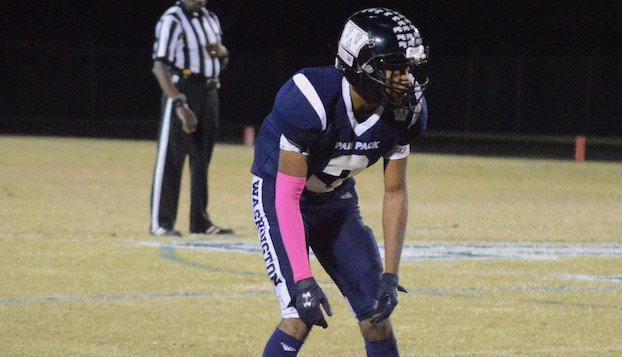 Senior Ryan Spruil has been a dual threat for Washington this fall at receiver and cornerback. (Steve Barnes/Washington Daily News)

Washington High School’s road trip through the 2A state football playoffs continues eastward to Elizabeth City Friday to take on third-seeded Northeastern (11-0) after a 48-40 victory at Burlington Cummings Friday.

It’s uncharted territory for all eight teams remaining, since the playoffs are not subdivided for the first time since 2002. The 11th seeded Pam Pack (10-2) join number 10 Wallace-Rose Hill as the only two teams not among the top eight seeds to advance to the third round.

“We are the lowest seed left and the only team from our conference still dancing, so we feel like we are playing well at the right time.” Coach Perry Owens said. “It’s special for our entire team, but particularly for our seniors. Those guys have picked it up in practice the last month or so and their attention to detail has been better because they don’t want their careers to end. We are where we want to be, but we have our work cut out for us Friday.”

The undefeated Eagles are ranked first in the MaxPreps 1A East poll, while the Pam Pack is seventh. Northeastern has posted 50 points or more in six games, while WHS set a program record with 555 points so far this season.

“They are better top to bottom than they were when they played for the state championship in 2019,” Owens said. “They have size, speed, a great quarterback and they are well-coached. That’s what you get this time of year, so we are excited to go play.”

Junior quarterback Jalen Melson has completed 69 percent of his passes for 2,346 yards, 29 touchdowns with five interceptions. His leading receiver is junior Shamar Sutton with 48 catches for 1,079 yards and 14 touchdowns. Four running backs have 350 yards or more and senior E.J. Gatling has posted 1,062 total yards rushing and receiving.

Washington counters with senior quarterback Hayes Pippin, who has completed 74 percent of his throws for 1,497 yards and 18 touchdowns with five interceptions. He’s also rushed for 1,135 yards and 10 touchdowns.

Senior Terry Moore leads the offense with 2,009 yards rushing (12.3 per attempt) and 36 total touchdowns. The Duke University commit also has returned a fumble, an interception and a punt for touchdowns in addition to throwing and catching a scoring pass.

Senior William Reid has a team-best 27 receptions and three touchdowns.

“We have several different looks we can show the defense and that’s what makes us so effective,” Owens said. “We’ve made great halftime adjustments down the stretch and we have to find creative ways to get our guys so they can operate in space. That’s the key for us. Northeastern is ranked number one for a reason.”