Moore chosen for the Shrine Bowl 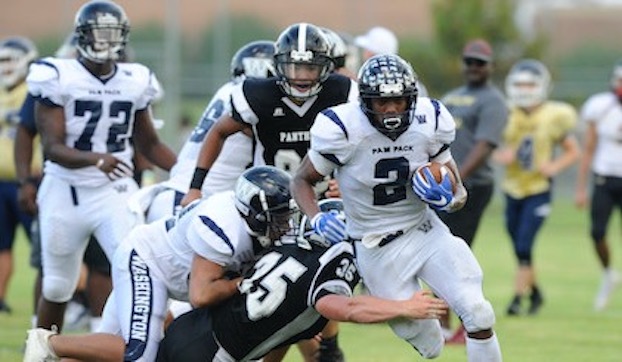 Senior running back/defensive back Terry Moore is only the third Washington High School football player to be named to the Shrine Bowl in the last 33 years. (Ashley Vansant/Washington Daily News)

The last two Washington High School players picked to play in the Shrine Bowl of the Carolinas went on to play in the National Football League, so senior running back/defensive back Terry Moore is in good company.

Moore was selected to the North Carolina roster for a game that usually pits the 44 best seniors in the Old North State against their South Carolina counterparts at Wofford College in Spartanburg, SC next month.

Although concerns about COVID-19 postponed the actual game for the second straight year, the organization still announced rosters, so seniors could be recognized for their on-field efforts.

“It’s too bad there won’t be a competition, but it’s still a huge honor for Terry and our program,” coach Perry Owens said. Owens played in the game in the early 2000’s while at Edenton Holmes High School.

“He’s had a tremendous season and career for us and it validates his effort and hard work. It’s a huge deal anytime a kid from a small school in the East is recognized state-wide. It shows that he can play on a high level and that he’s among the top 40 players in the state in his class.”

Moore has run for 2,009 yards and 29 touchdowns while averaging 12.3 yards per carry. He’s totaled 36 touchdowns and has scored on a punt, fumble and interception return, while also catching and throwing a touchdown pass.

The Pam Pack is 10-2 and faces Northeastern of Elizabeth City (11-0) in Friday’s 2A playoff third round game.

Terrance Copper (1999) and Walter Rasby (1989) are the two most recent WHS players to compete in the Shrine Bowl and both played multiple seasons in the NFL.

“It’s a great honor and a blessing to be chosen as one of the top players in the state,” Moore said. “I saw it on Twitter when they announced the rosters and it was very exciting. I’m disappointed to not get to compete on the field, but it is still a tremendous honor.”

It’s the first of many that will roll in over the next month, but Moore, a Duke University commit, is still very much thinking about his immediate future.

“I am focused on doing everything I can to help us win Friday and keep our season going,” Moore said. “Honors and awards are great and I appreciate all of them, but right now I am concentrating on getting the job done and winning.”

Friday’s game ended after this edtion went to press. Go to thewashingtondailynews.com for a full recap.