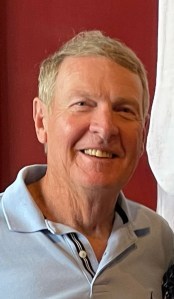 Chocowinity – Bradley Joseph Smith, 74, went home to be with his Lord and Savior after a short battle with cancer on November 19, 2021. He was born July 29, 1947, in New York City, NY to Joseph and Ruth Smith. He spent his childhood living in Mansfield, CT. He was a 1969 graduate of Norwich University in Vermont with a Civil Engineering degree. On June 14, 1969, he married Arline Smith (Maguire) in Norwich, CT. Brad proudly served in the United States Army Corp of Engineers from June 1970 to January 1972 serving as an officer in California and Vietnam. He worked for the Connecticut Department of Transportation until his retirement in 2003 as the Chief of Design. In 2009, he moved from Bolton, CT to Chocowinity, NC to be closer to his children and grandchildren.
He is survived by his wife Arline of 52 years; sons, Stephen (Tammy) Smith of Holly Springs, NC, Jason (Tricia) Smith of Chesapeake, VA, and Brian (Virginia) Smith of Gulfport, MS; and seven grandchildren, Connor, Keagan (Steve), Tyler, Tanner, Juliauna (Jason), Ben and Faye (Brian).
Brad adored his family and church communities, serving the Lord in multiple positions at Baptist Fellowship in Columbia, CT and First Baptist Church Chocowinity. He was devoted to volunteering with various Christian organizations and international missions. He was an avid sports fan and didn’t miss an opportunity to cheer on the NY Yankees and the NY Giants. In recent years he started playing pickleball and quickly mastered the game. Brad will be deeply missed by all those who loved him and served with him.
The funeral service will be held Wednesday, November 24th at 2:00 pm First Baptist Church Chocowinity. The family will receive friends following the service in the Family Life Center. A private burial service will be at Sarasota National Cemetery, Sarasota, FL in December.
In lieu of flowers, memorial contributions may be made to First Baptist Church Chocowinity at www.fbcchoco.com/giving or at 230 NC Hwy 33 W, Chocowinity, NC 27817 or to Community Home Care & Hospice-Washington, www.communityhch.com or at 222 W Stewart Pkwy #100, Washington, NC 27889.
Arrangements by Smith Funeral Service & Crematory, Greenville. Online condolences may be expressed at www.smithfcs.com.