Panthers prepare for more than a Thanksgiving meal 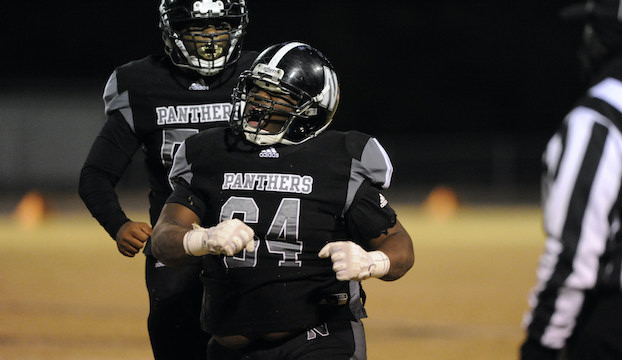 Senior defensive lineman Keon Satterthwaite and the rest of the Northside Panthers host the Pender Patriots in the fourth round of the 1A state playoffs Friday night. (Ashley Vansant/Washington Daily News)

Thanksgiving morning is a time of preparation for most. Tidying the house for company, packing the car for a trip or putting the turkey in the oven are all common occurrences.

The Northside football team will be busy Thursday morning as well, preparing for Friday’s fourth round 1A state playoff matchup with Pender High School at Bing Mitchell Field.

“A Thanksgiving practice is a great thing because it means we are still playing,” coach Keith Boyd said. “There are 32 teams left in the state playoffs across all four classes and we are one of them. Our guys are excited to practice in the morning, then we’ll all go home and enjoy our dinner with family.”

Third-seeded Northside (11-1) advanced with a 14-7 home victory over Southside Friday, while sixth-seeded Pender (9-3) made the two and a half hour ride from Burgaw to North Moore and eliminated the third-seeded Mustangs, 50-12 for their straight win while scoring 50+ points.

“It won’t bother them any to come over here and play us,” Boyd said. “They are very big and very athletic. They deserve to be in the East final four and we will have our hands full.”

Pender finished third in the 1A/2A East Conference behind Whiteville, who lost in the 2A third round Friday and South Columbus, who fell to Washington in the first round.

Both teams are run-oriented on offense. The Patriots average 307 rushing yards a game with 47 touchdowns, while the Panthers churn out 330 with 62 rushing scores.

The Panthers counter with senior Mitch Godley, who has 1,806 yards and 24 touchdowns, including both against Southside on the first two possessions Friday night.

“We started out doing what we do, but penalties (six for 60 yards) and the Southside defense made it tough on us,” Boyd said. “They (Southside) were 11-1 for a reason and we are the only team to beat them all year. We expect no different from Pender and we have to find a way to hold our blocks to let our backs get through the holes and get off their blocks on defense. We are facing a very good team, but that’s to be expected in the fourth round.”