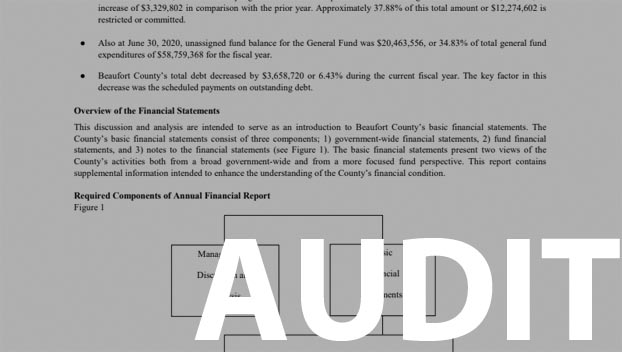 The Beaufort County received a positive audit report for the fiscal year 2020-21. Austin Eubanks with the accounting firm Thompson, Price, Scott, Adams & Co., PA, of Wilmington, said the audit showed the county has been “good stewards of the taxpayers’ money.”

The full audit hasn’t been released yet, pending approval from the Local Government Commission.

Discussions about specific areas of the audit led to a talk about possibly changing the board’s fund balance policy.

Commissioner Hood Richardson noted that the audit showed that Beaufort County’s available fund balance percentage is at 45.07%. The group weighted average general fund balance for 2020 – the average for 2021 is not yet available — was 35.05%.

“That amounts to almost $7 million,” Richardson said. “That is a bad reflection on this board. While we want to crow that we’re liquid and we have money, we’re not managing money properly. We’re doing two things; for the last three or four or five years, we have been underestimating revenues. And that’s what’s causing the fund balance to grow. … We’ve got a lot of money, of (the taxpayers’) money, that we have taken for taxes, that is sitting in the bank doing nothing.

“Beaufort County gave a paltry one cent, which is $700,000, of tax reduction this year,” Richardson added, “while we’re sitting on $7 or $8 million  of true surplus. That should be given back to the taxpayers. It is a bad reflection on the management of this board.”

… Now, you’re right, Commissioner Richardson; all counties, because of the flowing in of the COVID funds and the grant funding last year did show up significantly. So we did go from 35.68% to 45%. … It doesn’t really matter where our peer group is at; I think everybody’s in agreement that it is time to look at our fund balance policy.

Radcliffe said the commissioners can dive deeper into a potential policy change during their budget planning retreat in January.