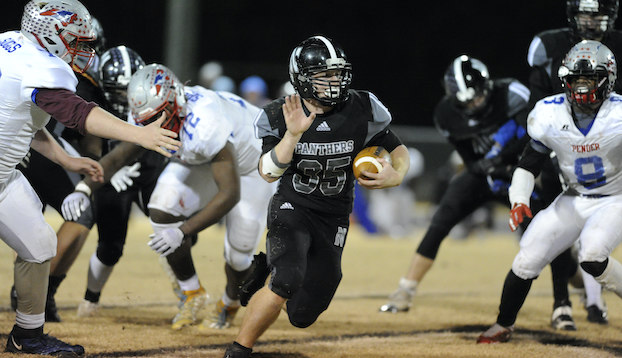 Northside senior Mitch Godley is the Coastal Plains Conference Player of the Year. He led the Panthers to the fourth round of the 1A state football playoffs. (Ashley Vansant/Washington Daily News)

The Coastal Plains Conference coaches picked Northside senior fullback Mitch Godley as the Player of the Year and voted nine of his teammates to the all-conference first team. Three more Panthers made the second team.

Godley led the Panthers to the conference title and an 11-2 overall record in a season that ended in the fourth round of the 1A state playoffs.

The bruising fullback averaged 9.3 yards a carry with 1,998 yards and 28 of the Panthers 66 rushing touchdowns. He gained over 100 yards in nine of the 11 games, including a 333-yard, seven touchdown outburst in the 77-40 victory at Pamlico County.

“There’s no doubt he was the best player in our conference,” Northside coach Keith Boyd said. “He worked very hard in the off-season to prepare, was a great leader for us and has earned every honor he gets. All 10 of them who made first team and those who were on second had great years. That’s why our team was successful.”

In addition, junior kicker Chase Tomaini earned Special Teams Player of the Year honors. He made 68 of 72 extra point tries and added a 35-yard field goal in his only attempt.

Senior Keifer Boyd is the All-Conference quarterback. He directed the Panthers high-scoring offense to 42 points a game on average and added 471 total yards rushing and passing.

Junior Marcus Clayton was picked at the Athlete position after rushing for 771 yards and 14 touchdowns, intercepting two passes for touchdowns and returning a punt for a touchdown. He picked off four passes and was in on 36 tackles from the defensive backfield.

“Having 13 players recognized for first and second team is a tremendous accomplishment,” Boyd said. “I believe that’s the most since I’ve been here. Making a deep playoff run helps them get recognized and our two losses were to the 2A East champion (Wallace-Rose Hill) and to the 1A East runner up (Pender).  They all worked hard and were very coachable.”

Southside will announce its All-Conference selections in early January.