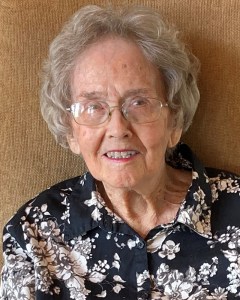 The family will receive friends from 1:00 PM to 2:00 PM Wednesday, December 8, 2021 at Athens Chapel Church of Christ, Bath, NC. Funeral services will follow at 2:00 PM at the Church, conducted by Chris Hux.

Mrs. Cutler was born in Beaufort County on August 9, 1931. She was the daughter of the late Otis Herman Waters and Sudie Adeline Cox Waters. Mrs. Cutler was a homemaker and a farmer’s wife. She was a very active member of Athens Chapel Church of Christ. Mrs. Cutler was a Sunday School teacher, a member of the Ladies’ Aid, assisted with VBS, and made floral arrangements for the church. She enjoyed sewing, collecting for the Cancer Society, and working on the farm. Mrs. Cutler was known for her hospitality and helping others.

Mrs. Cutler was married to Preston A. Cutler, who preceded her in death in 2016.

In addition to her parents and husband, Mrs. Cutler was preceded in death by a granddaughter, Priscilla Lynn Cutler.

The family will receive friends at other times at the home of her daughter and son-in-law, Glenda and John Scott Winfield, 783 Winfield Lane, Pinetown.

Flowers are appreciated or memorials may be made to the Athens Chapel Church of Christ Building Fund, 35 Delia Wallace Road, Bath, N.C. 27808.

Online condolences may be offered to the family by visiting www.paulfuneralhome.com. Paul Funeral Home & Crematory in Washington is honored to serve the Cutler family.