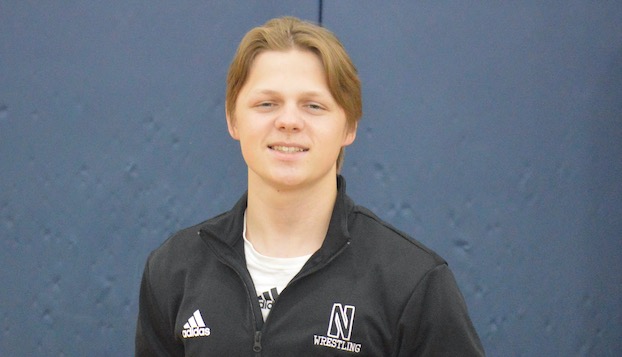 Northside senior Ronan Lewis was part of the first Panthers wrestling team in the spring and returned for his senior season on the mat this winter. Lewis grew up in Washington, attended Bath Elementary and now lives in Aurora. He is one of several Panthers who had never wrestled before the team formed.

Ronan: Because I thought it would be fun to try something new and it’s turned out really well. I like the idea of it being an individual sport and a team sport at the same time. When you are out there on the mat, it’s just you and your opponent. You are relying on yourself to do what you’ve learned in practice.

Ronan: That is was really hectic getting started. I played football in the spring when we went to the state championship game, so I literally had two practices before my first match. We all just kinda went out there and had fun. We learned new moves and things about the sport every day in practice and it’s carried over to this year. It’s been fun being part of something new.

Ronan: Everything about the sport of wrestling. I had him for band and he encouraged me along with other kids to come out for the team. I might not have kept going if it wasn’t for him. He’s phenomenal coach, a great teacher and a great guy. I’ve really enjoyed having him as the head coach.

Ronan: I’m not entirely sure yet, but I want to go to a trade school, possibly for welding. My dad and grandfather have taught me to use tools and I think I’m generally handy, so something along those lines.

Ronan: I like to be outside and I like to hunt. I also like to hang out with my friends and listen to country music. I like a mix of old and new country from Hank Williams Jr. and George Strait to Parker McCollum and Morgan Wallen. McCollum opening for Morgan Wallen would be a great live concert.