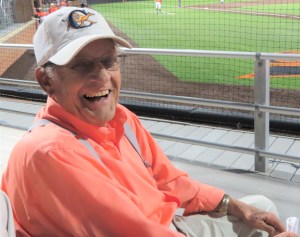 Morgan Holt Harris, 82, of Leland, NC (formerly of Swan Quarter and Bethel) passed away on December 8, 2021.  He was born November 8, 1939 to the late Truman and Vivian Harris in the Broad Creek/Douglas Cross Roads community of Beaufort County, North Carolina.

Morgan dedicated his life to working with young people in not only their education, but in life as well.  He believed that athletics was a great way to enhance education and life skills.

He loved sports and played high school football, basketball, and baseball at Bath High School, lettering in each sport.  He graduated in the Class of 1958 and entered Campbell College where he played baseball until he finished in 1960.  He valued the game and played it competitively for well over thirty years.  He then entered East Carolina College majoring in Health and Physical Education with a minor in History and Biology.  He worked with Motor Parts and Equipment Company in Washington, NC while in school.  He earned his M.A.Ed. and Educational Specialist Degree in Public School Administration at East Carolina University.

All of his professional career was spent in Hyde County except for one year at his alma mater, Bath High School, teaching and coaching.  While he worked with the Hyde County Schools, he served as teacher/coach, Assistant Principal, Vocational Director, Assistant Superintendent and retired in 1994 as Superintendent.  He worked a year with the NC Agricultural Extension Service as Assistant County Agent: 4-H and Horticulture.  He also organized and operated a Hyde County Recreation program. He was a basketball official for many years with the NC Northeastern Basketball Officials Association, working with Walter B. Jones, Sr, later Congressman, First Congressional District.   One thing he was most proud of was that although the Beaufort County and Hyde County teams were rivals on the court, they remained friends and respectful of each other in the community. In fact, he believed that Beaufort and Hyde Counties were synonymous.  His professional life allowed time to enjoy hunting and fishing throughout beautiful Hyde County.

Mr. Harris was always active in the community, church, and schools.  He received the Hyde County Jaycees Citizen of the Year Award on numerous occasions and served as a Hyde County Commissioner.  He was a Master Mason, receiving Ancient, Free and Accepted Masons Veteran’s Emblem of Atlantic Lodge # 294 in Swan Quarter, NC, where he received his 50-year pin in 2017.  Morgan was an ordained Stephen Minister where he counseled and helped many people. In 2011, he was inducted into the East Carolina University School of Education Hall of Fame.  He thought it was even more special that he and his wife, Dr. Margaret C. Harris were inducted at the same time.

He continued to love and support the baseball program at Campbell University throughout the years.  He was honored as the Campbell University Baseball Alumnus of the Year in 2015.    He was a member of the NC Baseball Museum Board of Directors.  Morgan was also a local author, historian, genealogist, sign painter, and illustrator.  He always illustrated his own books and maps.  He was famous for his “Hyde County Goose”.  Morgan was a master story-teller, motivational speaker, and humorist.  After retirement, he spent his time writing books–one being Hyde Yesterdays:  A History of Hyde County, counseling, and working with farm families with horticulture, especially grapevines.

Morgan was most humbled and honored when Mattamuskeet Early College High School dedicated the athletic fields in his honor as the Morgan Harris Athletic Complex in 2016.  Morgan loved Hyde County and its people passionately.

Morgan was a member of Bethel United Methodist Church in Bethel NC where he was a member of the Men’s Small Group Bible Study for many years.  He also attended Faith Community Chapel in Sunset Harbor, NC.

He is survived by his wife of almost 32 years, Dr. Margaret C. Harris of the home; a son, Vincent Truman Harris (Tamara) of Wilmington; two granddaughters, Sydney Harris (Josh Mills) of Wilmington, and Morgan Harris Garvey (Zach) of Jacksonville; two grandsons, Alex Cox, of Winterville and Preston Jolly (Meghan Campos) of Wilmington; one brother Neil C. Harris of Manteo and a sister Nell Harris Howell (Vernon) of Washington; sisters-in-law, Linda C. Harris of Marion, Jade Moore Harris of Everett’s Cross Roads and Sue Ellen Cannon Williams, of Greenville.  He is also survived by numerous nieces and nephews, as well as great-nieces and nephews and a great-great niece and nephew.

He was predeceased by his parents Truman and Vivian Harris and two brothers, Terry Harris and Edwin “Booger” Harris, Vietnam War Veteran.

Bryan Funeral Service of Swan Quarter is honored to serve the Harris family.