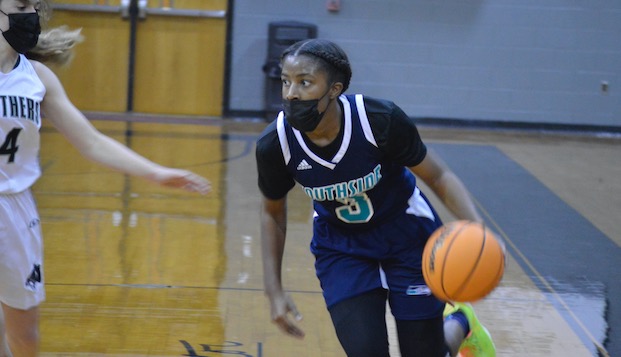 Ka’nyah O’Neal drives to the basket against Northside last year. The Panthers and the Seahawks are expected to battle it out in conference and state tournament play again this season. (Steve Barnes/Washington Daily News)

O’Neal started the season with 37 points and 14 rebounds in the Seahawks (3-0) 55-33 victory at Washington County to end the month of November.

She followed up with 26 points and 20 rebounds in a 51-34 win at Greene Central, then took center stage Monday at West Craven.

O’Neal is the only upperclassmen and captain on a team with four freshmen and four sophomores.

She already expected to carry the load, but took it a step farther with 55 points and 10 rebounds in the 73-72 overtime victory.

Not to be overlooked, her three-pointer from the corner as the buzzer sounded swished through the net to tie the game and force overtime.

“She is off to an incredible start,” coach Milton Ruffin said. “Everybody in the gym knows she’s going to get the ball, but she still finds a way to post incredible numbers. I knew it was going in when she shot it and we pulled in out in overtime.”

O’Neal’s mom, Melody Harvey, a former Northside player, signed her up for the Belhaven youth basketball league when she was four, and she hasn’t stopped yet.

Her family moved to Washington, where the nine-year old realized she had potential.

The soft-spoken protégé honed her skills with Coach John Lampkins at Athletic Edge in Washington and has played on several travel teams during the summer to continue to improve.

“He taught me to shoot and still puts me through training sessions every week,” O’Neal said. “He was the first one to talk to me about playing college basketball and that’s what I want to do after high school.”

The Southside team started slowly during the COVID-19 shortened and delayed 2020 season, but gelled at the end of the regular season. The Seahawks made it to the third round of the 1A state playoffs before losing at Princeton, who beat Northside in the next round and advanced to the title game.

Princeton moved to 2A in the recent realignment, so the two local rivals look to clash deep in the playoffs again.

“We are really young, but there’s no reason we can’t get back or do better than we did last year,” O’Neal said. “There’s no doubt Northside is in our way and it will be fun playing them in our league.”

Three freshmen and a sophomore start alongside O’Neal, but Ruffin sees the others taking some of the load off their captain as the season continues.

“She (Ka’nyah) knows they look to her to do most of the work, but she’s very unselfish and wants to get the others involved,” Ruffin said. “She’s encouraged them in practice and is very much a team player on the floor. Her goal is to win and she’ll do whatever we need to make it happen.”

The big colleges have yet to make contact, but 55 points in a game should garner some attention. UNC-Charlotte was the first to contact her and O’Neal says they are the favorites so far.

“I’ve visited the campus twice and really liked it,” she said. “I like the coaches and they seem to be interested in me. I’ll continue to do my best on the court and the rest of it will work out.”