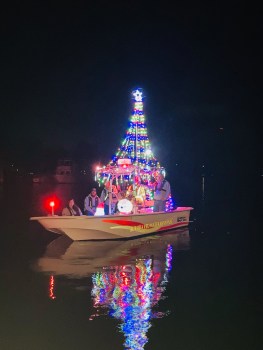 This Carolina Skiff was entered by the Aurora Fire Department, featuring with full size Christmas tree and snow characters. The boat also led the Dec. 4th, under the supervision of fire chief Kevin Bonner. (Wes Williams) 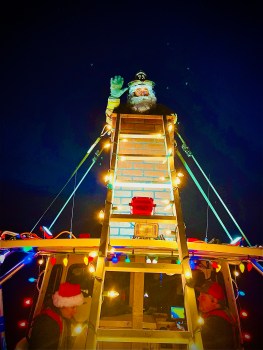 The boat sponsored by the Bunyan Fire Department — which won the prize for best boat in the group — featured a Santa Claus figure on his way out of the chimney. (Wes Williams) 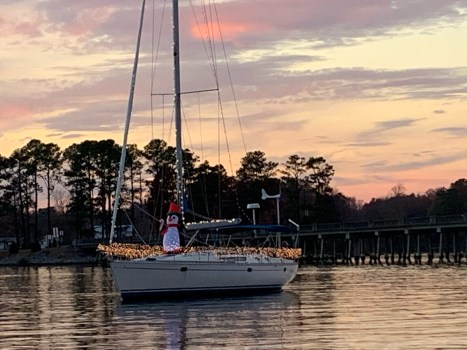 This is the Ancient Pelcan, a 1998 Jenneau Sun Odyssey owned by John O'Neill of Bath. (Wes Williams)

“The flotilla is purely local. There’s no entry fee, and anyone with a boat is welcome,” O’Neill said of the tradition, which was launched in 2017 by former Turnage Theatre / Arts of the Pamlico director Debra Torrence and Clay Johnson.

Participating boats gather near the Bath 92 Bridge and begin the flotilla at 5 p.m., just as the sky is darkening. They are usually all brightly decorated for the Christmas season, each nautical team working hard to win first prize in an “after party” where a vote is held to determine which vessel was decorated the best.

Nine boats and crews participated this year, led by the Aurora Fired Department vessel and moving down Bath Creek to Bonner Point. O’Neill said smaller boats traditionally head up Back Creek to the Quarterdeck and back while larger boats “get to circle out in front of Bonner Point, then join back up to loop the main part of Bath Creek.”

Participating boaters are not the only ones enjoying this relatively new nautical tradition. “Cars park at Bonner Point to watch, and there was a lot of hooping and hollering from the shore this time,” O’Neill said, adding that the group’s after-party has traditionally been open to landlubbers “and anyone else who wanders by.”

This year’s winner is the boat sponsored by the Bunyan Fire Department, led by Chief Wes Williams. The vessel included “a full-sized Santa Claus coming out of the chimney”, which O’Neill credited with the win, which allows them the privilege of keeping the trophy until the next year’s event. The 2021 event – and trophy – were dedicated to Paul Minor, owner of Bath Harbor Marina, who died unexpectedly in mid-November.