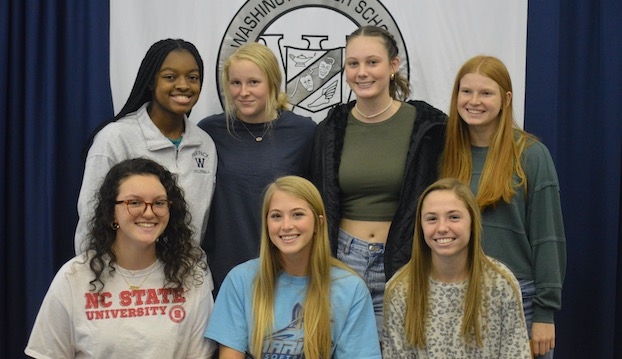 The Marlins are the Division III national champions after winning their third title in four seasons this past spring.

Campbell, a second baseman, helped the Pam Pack to a 12-4 overall record, including an 11-1 Eastern Plains Conference runner-up finish.

“She’s been an all-around great player for us,” Pam Pack coach Brad Horton said. “She started as a freshman in right field for us, then moved to second base. She gives us speed on the bases, she’s a strong hitter and she has excellent hand-eye coordination. I think she’s going to have a great career up there.”

Campbell batted .571 for the Pack, scored 24 runs and drove in 16, all second on the team. She also contributed four doubles and as many triples.

She’s spent the past seven years playing for a Greenville-based travel team and that’s where the introduction to her future school happened.

She was part of a showcase camp at East Carolina when Marlins assistant Jim Quinn took off his 2019 championship ring and urged her to try it on.

“It was a little big on my finger, but it definetly piqued my interest,” Campbell said. “I’ve been to four or five camps up there and visited a couple of other times. I decided on Veteran’s Day 2020 when I was up there that it was the right place for me. It’s the perfect atmosphere and everything just clicked when I visited.”

Campbell will carry on the family softball tradition. Her older sister, Summer, earned first team All-America honors for Pitt Community College this past spring. The former Pam Pack standout led the Bulldogs with a