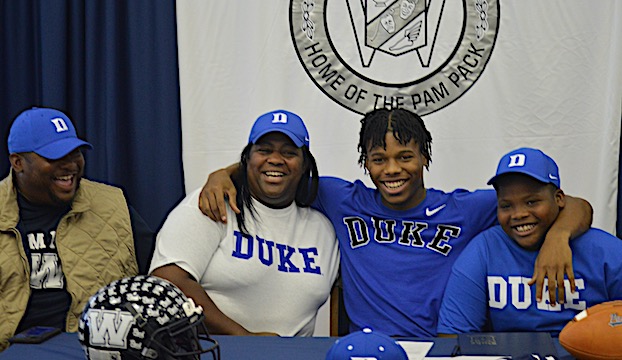 Washington High School senior running back/safety Terry Moore ended what turned out to be a rather frantic recruiting process by signing his scholarship papers to attend Duke University Wednesday afternoon in his high school’s media center.

“I’d like to thank my family, teachers, coaches, teammates, friends and everybody else who has helped me along the way,” Moore said. “Most of all, I’d like to thank God for his blessings and Duke University for giving me the chance to play in the ACC. I promise I won’t let you down.”

What was a smooth process throughout the fall turned hectic after Blue Devils coach David Cutcliffe resigned two weeks ago following three losing seasons and a winless conference campaign in 2021.

Moore heard from all the schools that were recruiting him earlier, plus some new ones after the news broke and didn’t make his final decision until earlier this week after a meeting with new Blue Devils coach Mike Elko.

“My family and I met him in Durham Sunday,” Moore said. “He made a great impression and really eased my mind. It was a very stressful two weeks and I’m glad it’s over. I’m sure I made the right decision.”

Moore led the Pam Pack to the 2A Eastern finals in the COVID-19 delayed spring season, then followed up with 2,089 rushing yards and 39 total touchdowns in a 10-3 senior campaign.

“It’s phenomenal how much he has improved since he was a freshman and he was really good then,” coach Perry Owens said. “He was really fast, but weighed 145 pounds, so I kept him on JV so he wouldn’t get hurt. He has worked hard in the weight room and is 195 (lbs.) now. He has done everything he could to get better and, more importantly to him, help us win.

He’s an outstanding student and an even better person. I’m very happy for him and his family.”

Moore’s time in the classroom at WHS is over as he will graduate early and head to Durham for the spring semester in early January. With the coaching change comes a potential opportunity.

“They recruited me as a safety and I’m fine with that, but Coach Elko told me I will get a chance to play running back also,” Moore said. “I’m excited and we’ll see what happens.