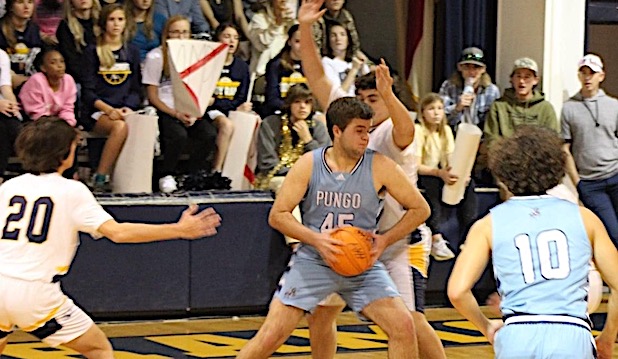 The boys overcame a six-point opening quarter for a 65-40 victory. They used a full-court press to rally in the second and outscored the Wildcats 23 -8 for a 29-14 halftime lead.

Columbia started the second half with a 10-1 run to cut the lead to six, but the Raiders responded with 35 points to set the final margin.

Things went differently for the Raiders in Thursday’s trip to Greenville to face John Paul II.

The girls had a chance to tie the game with 10 seconds left, but missed a free throw and ended up losing 43-40, when a three-pointer fell short at the buzzer.

The boys team lost 67-56 after trailing 20-8 at the end of the first quarter. They rallied for a 29-27 halftime deficit., then allowed a 20-2 Saints run to start the second half. Another rally set the final margin at 11.

Drew Van Staalduinen led PCA with 14 points and 12 rebounds. Lee had 12 points and Sawyer added 10 points and nine rebounds, as the Raiders fell to 5-4.

The Terra Ceia boys are 3-4 after a 101-83 loss to New Age Academy of Elizabeth City Friday in their final game before the holiday break. The teams will meet again at Terra Ceia to start the 2022 portion of the season.

The girls are 4-1 at the break after a pair of wins over Hobgood Academy, Cape Hatteris and Unity Christian.