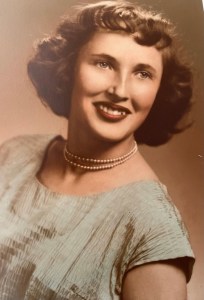 Mrs. Gloria Beulah Thomason Forbes, a resident of Chocowinity, NC, passed away peacefully surrounded by her family at her home.

There will be a private graveside service for family only.   A celebration of her life will be held at 11 a.m., Saturday, December 18 at Wayside Presbyterian Church in Chocowinity conducted by her nephew, Pastor Worth Forbes.

Gloria was born in Montgomery, Alabama, August 1935 to the late Joseph and Olive Dupriest Thomason.  She was a graduate of Central High School in Phenix City, Alabama.  She attended college at Ouachita Baptist University, in Arkadelphia, Arkansas and Beaufort Community College in Washington, NC.

She was employed by the telephone company in Greenville, NC, Secretary at both Grimesland School and Chocowinity High School, and door greeter at Kmart in Washington, NC.   She was a faithful servant to her husband throughout his ministry at Wayside Presbyterian Church for 52 years.

Survivors include her husband of the home, Ola Forbes, Jr., two daughters Lisa Carrow and husband Tony of Pinetown, Olive Waters and husband Jeffray of Chocowinity, one son, Jason Forbes of the home and three great grandchildren, Mandi Combo of Jacksonville, Dillon and Austin Weaver of Wake Forest.

She was preceded in death by her parents, two grandchildren, Gary Wayne Peed, Jr. and April Elaine Weaver, one great grandchild Hunter Weaver, and one sister June Lenora Thomason Hayes.

Special thanks for the prayers and support from our Church families and caregivers during this time of need.

Flowers are welcomed and may be delivered to Wayside Presbyterian Church from 9:00 am until 10:30 am Saturday prior to the service and memorial may be made to, Wayside Memorial Fund, P.O. Box 70, Chocowinity, NC  27817.

The Forbes family is honored to have Cotten Funeral Home to serve their family at this time.