Lady Raiders on a roll 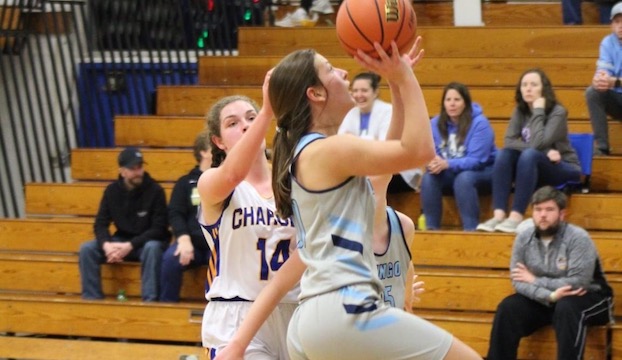 Pungo Christian Academy junior Abbey Cutler goes in for a layup in a game earlier this season. (Contributed photo)

PCA (5-4) climbed above the .500 mark by routing Community Christian of Wilson, 63-22, then finished the non-conference schedule by dominating Unity Christian, 64-34 Thursday.

All nine Lady Raiders scored against Community as junior post player Reagan Stoop led the way with 21. Ginny Pugh had 11 and Abbey Cutler added 10 before leaving in the second half with an ankle injury.

Thursday, PCA scored 26 points in the first quarter and 21 in the fourth on the way to the 30-point win, over the Warriors (1-2) who were playing their first road game.

Every Lady Raider scored again, as Stoop poured in 15 points in the fourth quarter to finish with 31. Twins Ashley and Kelly Williford combined for 21.

“We’ve had two good games where everyone has scored, which will help us down the road,” coach Leigh Stoop said. “We hope to keep it going after break.”

Reagan Stoop leads the team with 20 points and 15 rebounds per game, while Cutler averages six points and four steals per game. Pugh adds five points and seven rebounds a game.

Meanwhile, the Raiders boys are part of the Crusader Christmas Classic hosted by Grace Christian of Sanford this week.

They are 5-5 after a 74-54 loss to Community Christian last week. PCA cut a first half deficit to five in the third quarter, but the Cyclones went on an 18-2 run to put the game out of reach. Maddox Lee led the scoring with 14 points. Drew Van Staalduinen had 12 points and 13 rebounds, while Wilson Sawyer added 12 points and 11 rebounds.