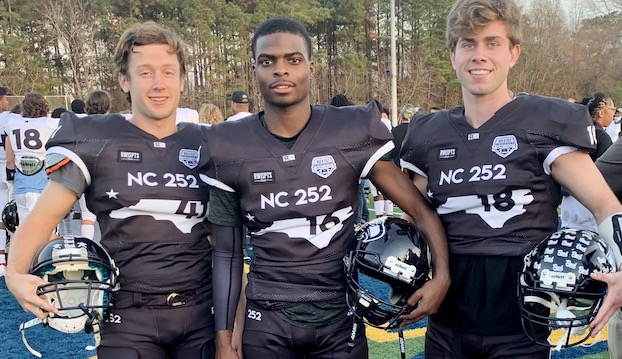 The match-up featured some of the best seniors from the 919 area code around the Raleigh-Durham area against the best players in the East.

Coffield played about half the snaps at cornerback and was in on several tackles. He also was part of the punt return team.

“It was a great experience being part of the first All-Star game,” Coffield said. “We went over there Wednesday and had two practices a day until the game. It was really fun staying in a hotel and meeting guys we had played against during the season. My roommate was from Warren County and it was neat meeting him and some of the other guys on our team. It was good competing with the Raleigh guys and it was a great setting to play my last high school game.”

Each squad had 40 players and each one played in every quarter.

McKayhan was the 252 offensive player of the game with three catches for 62 yards and the touchdown catch from Pippen.

Northeastern’s Kaevon Freshwater was the defensive player of the game with six tackles and three sacks. He also scored 252’s first touchdown on a three-yard run.

“It was a great honor for all three of them to represent Beaufort County in the game,” Southside coach Jeff Carrow said. “I hope they continue with this format in the future.”