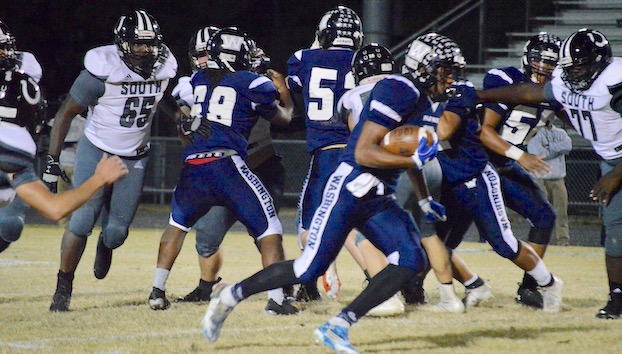 Terry Moore runs for daylight against South Columbus in the first round of the 2A state playoffs. (Steve Barnes/Washington Daily News)

Washington High School senior running back/ defensive back Terry Moore collected the first of many state-wide recognitions as NC Preps chose him to be part of their All-State team.

The award is significant because athletes from schools around the state are chosen regardless of classification. Moore joins Wallace-Rose Hill running back Kanye Roberts, Shelby linebacker Malaki Hamrick and Whiteville’s Daejuan Thompson, who was chosen as an athlete, as 2A players on the 31-player squad.

“It’s a phenomenal accomplishment that adds to his legacy at Washington High School” coach Perry Owens said. “It’s huge for a guy from a small school in the east to be one of the 30 best players in the state, regardless of classification. It’s good for our program and great for him. Good things come to those who work and he’s earned it in the classroom, the weight room, on the field and in the community.”

Moore, a Duke University signee, ran for 2,089 yards and scored 39 total touchdowns in a 10-3 season that ended in the third round of the 2A state playoffs.