‘All about the kids’: Woolard gives back to community 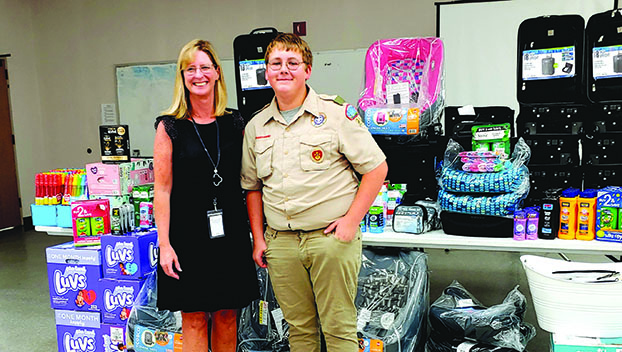 Jake Woolard made sure to thank DSS Childrens’ Services Supervisor Karen Chrisman for all the help she and local DSS staff gave him and his adoptive parents. They posed for this photo in front of the four tables full of supplies and gifts he brought as part of a gratitude-centered Eagle Scout project, meant for foster children and the adults who will care for them until they are adopted. (Karen Thiel)

Jake Woolard is a quiet 15-year-old whose mom, Betty, says has returned every bit of love he’s received since the day he was adopted by Betty and Jerry Woolard. Jake makes lots of people smile these days. An active member of Boy Scout Troop 21, the ambitious teenager has spent much of 2021 working toward the day he receives the honor of becoming an Eagle Scout. The final meeting is in January, part of a long, involved process that also requires candidates to complete a service project. Jake decided to use that project to give back to the people who helped his parents adopt him – then added some extra folks to his list.

Jake and several of his troop members converged on Washington’s offices of the Department of Social Services on his 15th birthday, loaded with gifts for children who were still waiting for their forever homes, as well as the foster parents whose love might be the first they’ve ever known.

It took four cafeteria tables before Jake’s delivery could be displayed for DSS workers who, when they entered the room, uniformly broke into tears.  “We are so proud of you, Jake! There is always a need every day, for all our kids… thank you,” said DSS Childrens’ Services Supervisor Karen Chrisman.  Jake immediately returned the gratitude. “You have a tough job,” he told the group, “and I appreciate all you do to keep us out of harm’s way. If it wasn’t for you, I wouldn’t be here with my mom.”

Jake’s gift included diapers, car seats, an array of personal care supplies, and “lots of stuff for the kids who arrive with their few worldly belongings in garbage bags,” Jake said, as he pointed toward his favorite gifts: 30 brand new suitcases meant to hold the minimal belongings foster children get to keep.

Jake’s shopping trips were paid for with money he earned by creating several local fundraisers. He sold 85 boxes of Krispy Creme donuts before the end of his first day at one weekend community event. He borrowed a hot dog wagon several weeks later and raised most of the rest of the money that has funded his projects.

DSS was Jake’s first stop. The Kelly Children’s Home welcomed him next, where he presented a ceremonial check to co-founder Alexis Kelly – then quipped “here’s the real money” as he handed her $1,300 in cash for the home, which will eventually house teenagers who “age out” of foster care and still need a safe place to live.

His parents say gratitude has always lived large in Jake’s heart. “We have been very open with him since day one. He knows he is loved even more than if I had him by natural birth, because we chose him. He wants to give back to where he came from,” Betty said, “because it’s supposed to be all about the kids.”

One hand can make a difference in Hyde County