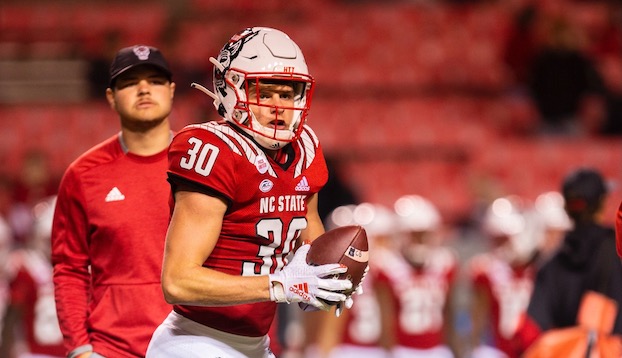 Walt Gerard was an All-Conference linebacker at Washington High School, but is learning the safety position for the North Carolina St. Wolfpack. (Contributed photo)

When opportunity finally called, Walt Gerard made sure he answered his phone.

The former Washington High School All-Conference linebacker was in the car leaving the San Antonio (TX). airport with his parents and grandfather in mid-August when his phone lit up.

The family was in town to attend his uncle’s wedding, but that didn’t end up happening.

North Carolina State Director of High School Relations Henry Trevathan was on the other end with a question. A spot had opened on the Wolfpack football roster and, even though pre-season practice had already started, would he be interested in filling it?

Would he? Yes sir couldn’t spill from his mouth any faster, and just like that, Gerard’s life changed. He caught the next plane home, spent the night while packing and headed for Raleigh at six a.m. the next day. His uncle understood.

“I had been in touch with Coach Trevathan since our season ended in the spring, so it wasn’t like it was totally out of the blue, but I definelty didn’t know the call was coming” Gerard said. “I hadn’t heard from anybody in a while and my heart skipped a beat or two when I saw his name flash up on my phone. It was really cool that my parents and grandpa were there because they’ve been my biggest supporters.”

Gerard had grudgingly begun to accept that his football career, one that started in the Washington Youth Football League that his dad and others help start, was over.

He had offers to play at smaller schools, but it was the Wolfpack or bust. Until that point bust had won.

“That’s the only place I wanted to play,” Gerard said. “My dad played there and we’ve gone to games there my whole life. I told myself that it was going to be okay not playing, but it really wasn’t. I’m very grateful to God and the Wolfpack coaches for giving me the opportunity.”

Gerard was a 6’0, 190 lb. linebacker for the Pam Pack, undersized for Division I at that spot, but okay for the secondary. His closing speed and hard-nosed approach also made the Wolfpack take note.

“He was a once in a generation player for us at Washington High School,” said coach Perry Owens. “He had 125 tackles his senior year, was in the National Honor Society with a 4.3 GPA and never missed a lift or a run in four years. He made a lasting impact on this program with the way he handled his business and we probably would have played for the state championship if he hadn’t hurt his shoulder. I’ve very proud of what he’s accomplished and there’s more to come.”

Gerard injured his AC joint on his right shoulder in the first half of the Eastern finals against St. Paul’s. It didn’t require surgery, but was still healing over the summer when the N.C. State call came.

Gerard has been in uniform for all home games and goes through all the reps in practice, but won’t play until next fall, which gives the shoulder even more time to recover.

He will travel to San Diego with the rest of the team for Tuesday’s Holiday Bowl against UCLA, capping an unexpectedly superb first semester.

“I’m really excited to travel and bowl should be a lot of fun,” Gerard said. “It was strange walking into the locker room for the first time after everyone else had already started practice, but they treated me great from the start. It feels like family now.”

Gerard took 14 hours in the fall, working toward his Business Administration degree. All player’s days begins with a 7:15 a.m. team breakfast, various team and position group meetings, then practice until noon. Classes run from then until 4 p.m.

He was one of three freshman walk-ons to dress for every home game and was on the sideline for epic victories over Clemson and North Carolina.

Off-season weight training follows the bowl game, with a chance to play on special teams in the fall.

“I know I have to put in 10 times the work everybody else does to compete for a job. It’s a fight for every spot on the field, but I’m okay with that. I’m not afraid to work and it’s been a dream come true so far. I thank my parents, coaches, teammates, teachers and everybody else who has helped me get here. Running out of that tunnel at Carter-Finley Stadium with the crowd going wild makes everything worth it.”