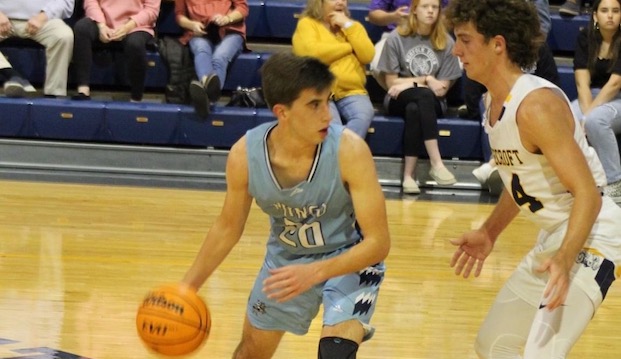 The Raiders were without leading scorer Maddox Lee (17 ppg) all week because of a fractured index finger on his shooting hand he suffered in a practice last week and lost starting point guard Devin Cadle to a knee injury in the final contest.

The Raiders lost 72-61 to Faith Christian School in the first round. PCA fell behind by 18 points early in the second quarter, but went on an 18- 4 run for a 33-29 halftime deficit.

The Patriots answered with four straight 3-pointers to take a 60-46 lead into the final quarter to ice the win.

Wilson Sawyer led the way with 17 points and 8 rebounds. Cadle had 15 points and 4 assists.

PCA battled the Thales Academy of Apex Titans to the final buzzer in the second game before falling, 60-59. Despite being down 42-16 at halftime, the Raiders used an energetic third quarter to cut the deficit in half.

PCA continued to rally in the fourth quarter and cut the Titan lead to four with two minutes to play., but were down seven with 40 seconds left.

Cadle stole an inbounds pass and scored to make it 60- 55. Wilson Sawyer stole the next pass and scored as he was fouled to make it 60- 57 with 15 ticks left. He missed his free throw but Drew Van Staalduinen came up with the rebound but his pass was deflected out of bounds with just over 10 seconds remaining. The Raiders got the ball to Austin Garrish who scored a quick layup and PCA called timeout with 5 seconds left down 60- 59. PCA would foul with 3.2 seconds left, but Thales missed both free throws.  Garrish grabbed the rebound and fired a pass to Bo Spencer whose 3 point shot fell short at the buzzer.

PCA lost to Cape Fear Christian Academy, 75-31 in the final round of the tournament.

Cadle came out mid-way through the second quarter with a knee injury and would not return, leaving the Raiders without either of their main ball handlers. PCA shot just 19% from the field, but made 15-16 free throws, Van Staalduinen scored 19 points to go along with seven rebounds. Sawyer chipped in eight points and six rebounds and the Raiders finished the first half of the season 5-8.

“We’ve faced a challenging schedule so far with the majority of our games against bigger schools,” coach Logan Van Staalduinen said. “We return just two starters and the others haven’t played much at the varsity level. I’m proud of our ability to come back from big deficits, but we need to correct some things so we aren’t in that position. We’ll get healthy over the break and I think we’ll be in a good spot to make a run at a conference championship.