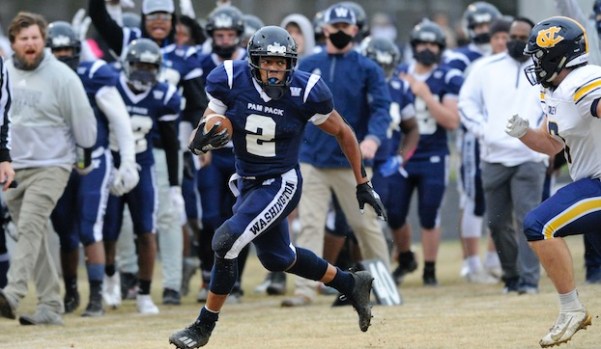 Pam Pack running back Terry Moore left his mark on Washington High School athletics in many ways. The three-sport star has graduated early and will start classes at Duke University in a couple of weeks. (Ashley Vansant/Washington Daily News) 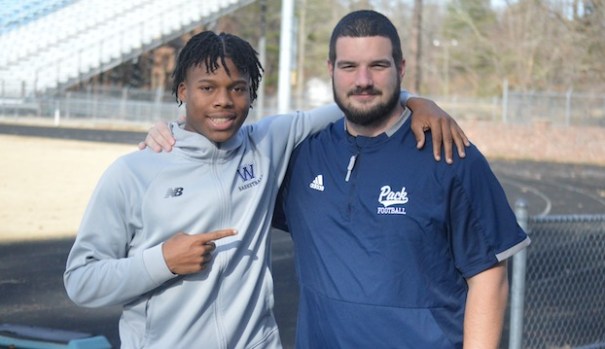 Terry Moore with Washington High School football coach Perry Owens, who was the offensive coordinator his first two years before taking over as the head coach. Owens also coached Moore during his three seasons on the track team. (Steve Barnes/Washington Daily News)

He’s unwrapped his Christmas presents, cleaned his room and is almost finished packing. He’ll save room for a couple more home-cooked meals, then start the next chapter of his life in just a couple of days.

Terry Moore has accomplished a lot during his high school career, now it’s time to make his mark as a member of the Duke Blue Devils football team.

The soon-to-be-18 year old (Jan. 18) leaves with multiple conference championships in football, basketball and track, too many individual awards and honors to count, a 4.4 grade point average and, perhaps most importantly, a legacy for others to follow.

“Josh Gordon and Gary Payne are the next two guys up,” coach Perry Owens said. “Terry has guided them like Mike Clark and Ganeryan Parker pushed him. Those guys didn’t win much, but they set the foundation. Terry listened, worked hard and has led our program to a pretty high level. For all his accomplishments, that might be his greatest legacy.”

One of the best athletes to come through Washington High School in recent memory always had a plan, but he didn’t know how to execute it.

“I watched my brother (Jaquez Columbus) play here and thought it would be fun to do,” Moore said. “I realized I was pretty good in middle school and that’s when I thought about playing in college, but didn’t know how to make it happen.”

Moore reported to summer workouts before his freshman year at 145 lbs., but stood out immediately. As the offensive coordinator, Owens realized Moore was better than the older players running the ball, but knew he needed time to put on some weight while excelling at the JV level.

“He was faster than most, but if somebody caught him, he was going to get hurt,” Owens said. “We held him out until the last game of his freshman season against North Lenoir when we needed a win to make the playoffs.

His first carry went for 30 yards, we won and a tremendous career started right there.”

With his older teammates help, Moore figured out the path to college football led through the weight room. Forty pounds of muscle later, his already fleet feet gained half a second over 40 yards and his endurance grew exponentially.

“They (the older players) taught him how to work and he trusted the process and got better,” Owens said. “We have weight routines and drills for everything and Terry took full advantage. He trains when nobody else is around and is always trying to get better. The sky is the limit with all the resources they have at Duke. I guarantee he will take full advantage of them.”

The Blue Devils were among the major schools to take notice over the summer and Moore committed shortly after attending a workout day on campus. Duke and other schools projected him as a safety despite his gaudy numbers as a running back.

East Carolina University, his mom’s alma mater, wanted him badly, but the lure of great academics and a chance to play in the ACC ultimately won out.

Moore thought his future was secure, but veteran coach David Cutcliffe and the school parted ways at the end of a second straight disappointing season.

Suddenly, he was being recruited all over again as he fielded calls and texts from numerous big-time programs, including the Pirates.

“They were all telling me that nobody could predict what would happen at Duke, but their program was stable,” Moore said. “I had to listen to all of them just in case, but I still really wanted Duke to work out.”

The Blue Devils hired Texas A&M defensive coordinator Mike Elko to replace Cutcliife and the Moore family went to Durham for a meeting that would determine Terry’s future.

“He put my mind at ease with his first couple of sentences,” Moore said. “He talked about his morals, his family and what the Duke program could be. He also told me I would get a chance at running back, which is very exciting.”

Moore reports Monday for a physical and orientation, then classes start the following week. He’ll have time to chart a new course, just as he did in high school.

“I’m ready to get in the weight room to keep getting better and to attend college classes” he said. “I’m excited to learn a different routine and meet my teammates. I’m proud of what I accomplished at Washington High School and I thank Coach Owens and everybody who helped me along the way. I hope I’m leaving the football program better than I’ve found it and I’ll come back to visit when I can.”