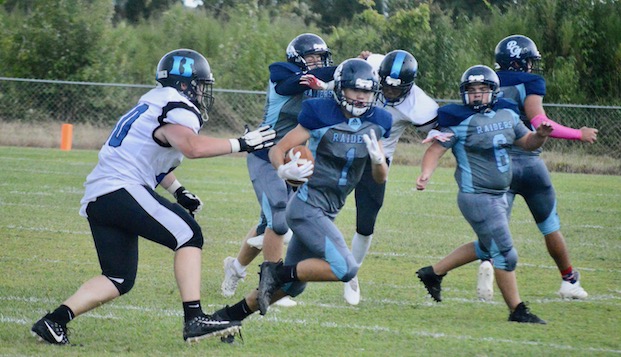 Pungo Christian Academy junior Conner Sweet runs the ball against Bethel Academy of Greenville in a game last fall. Because of a rule change at the state level, it will be harder for the Raiders and other small schools to win a state championship. (Steve Barnes/Washington Daily News)

Just a year removed from playing for a state football championship, Pungo Christian Academy will have to navigate a much bumpier road to a return appearance.

Football-playing members are grouped by size into two divisions for that sport only and are further subdivided into groups of smaller schools who play 8-man and the larger schools who field regular 11-man squads.

PCA is one of the smallest schools in terms of enrollment to field a football team and compete in Class 1A Division II.

With fewer teams scheduled to play football in the fall of 2022, the NCISAA decided to combine all schools who play the 8-man version into one division regardless of size, while creating one eight-team playoff for the state championship.

“I understand why they are doing it, but it will be much more difficult for us,” Raiders Athletic Director Logan Van Staalduinen said. “We have 15 or 16 kids on our roster in a good year and now we’ll have to face teams with 30-35. We will still field a team and do the best we can, but it will be a tough obstacle to overcome.”

PCA was the only Beaufort County team to play in the fall of 2020 because of COVID-19 and played just six games, including two playoff contests. They struggled to a 2-7 mark under more normal circumstances in 2021.

“Grace Christian of Raleigh moved up to 11-man, Wayne Christian went to Division I and Community Christian (Wilson) left the association,” Van Staalduinen explained. “That left us as one of only five schools in Division II, so it makes sense to combine things and play one championship game.

We saw it coming and there are no hard feelings. Hopefully our membership will grow in the next year or two and we can have a separate game for smaller schools.”