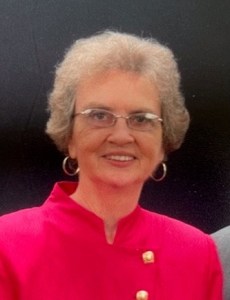 Mrs. Alligood was born in Beaufort County on August 20, 1933. She was the daughter of the late Harry Skinner Hodges, Sr. and Minnie Willard Hodges. Mrs. Alligood graduated from Washington High School and East Carolina Teachers College (now ECU).  She was a retired kindergarten teacher.  Mrs. Alligood served as Den Mother for her sons’ scout troops. She was a member of the First Christian Church, the CWF and participated in the Peanut Ministry. In her spare time, Mrs. Alligood enjoyed doing cross stitch. She also enjoyed baking sour dough bread which she shared generously with others.

In addition to her parents and husband, Mrs. Alligood was preceded in death by a sister, Hope Taylor and a brother, Harry Skinner Hodges, Jr.

The family will receive friends following the service at her home.

Flowers are appreciated or memorials may be made to the Dementia Alliance of North Carolina, 9131 Anson Way, Suite 206, Raleigh, N.C. 27615.

Paul Funeral Home & Crematory in Washington is honored to serve the Alligood family.