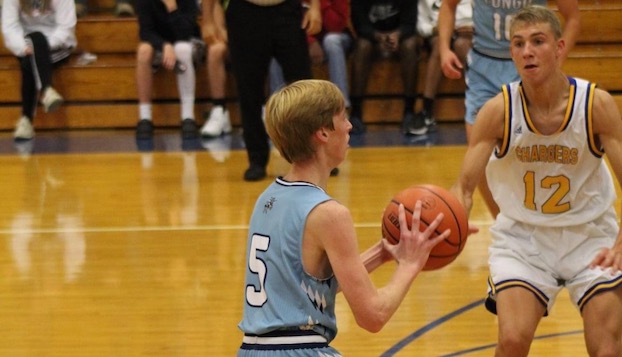 The Pungo Christian Academy varsity boys ended a 4 game losing streak by starting 2-0 in conference play this past week.

Tuesday, the Raiders hosted the Warriors of Lawrence Academy in the conference opener, while playing without starting guard Bo Spencer, starting center Drew Van Staalduinen and reserve Davis Lee due to COVID-19 protocols.

Down to just seven players, the Raiders faced a tall task in beating a good Lawrence team that they defeated at the buzzer in the last matchup. After a back and forth first half, the Raiders trailed 30-26 at halftime.

PCA capitalized on Warrior foul trouble in the third quarter by going on a 10-0 run to start the final period and went on to a 59-44 victory.

Maddox Lee led all scorers with 21 points in his first game back from injury. Wilson Sawyer had a season-high 18 points and Austin Garrish had his second career double-double, with 10 points and 11 rebounds. Devin Cadle added eight assists.

Friday, PCA faced a struggling Albemarle School Colts team. The Raiders came out hot, outscoring the Colts in the first quarter 28-12 and 31-6 in the second for a 59-18 halftime advantage.

It was smooth sailing the rest of the way with a running clock and the Raiders went on to win 80-34. Maddox Lee lead all scorers with 26 points, all in the first half. Drew Van Staalduinen had 12 points and 10 rebounds in his first game back. Deacon Etheridge had a season-high nine points and seven rebounds for the Raiders.

“It’s great for our guys to bounce back after a four game losing streak to start 2-0 in conference” head coach Logan Van Staalduinen said. “I think the Christmas Tournament we played in help prepare us for conference and kept our guys engaged over the holidays. Our win against Lawrence was huge, especially down three key players. We have a young but deep team and guys stepped up this week.”

Meanwhile, the Lady Raiders are 6-5 overall and 1-1 in Tar Heel Independent Conference play after a 31-29 loss to Lawrence Academy Tuesday and a 49-21 win at the Albermarle School Friday.