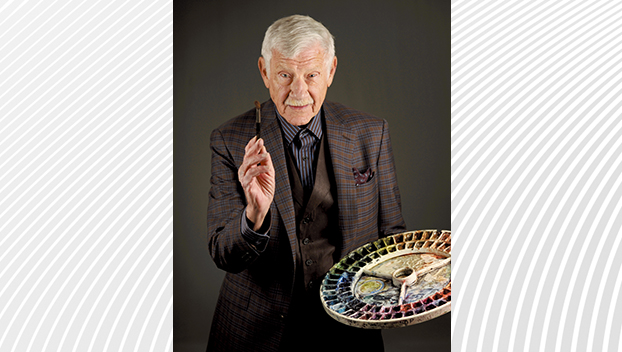 The weekend blitz of winter weather is over, and events organizers at Arts of the Pamlico are picking up right where they left off – by rescheduling the opening reception for “The Vault”, an exhibit in honor of famed local watercolorist Jeffrey Jakub.

The reception was originally booked for last Friday, when the exhibit of his work opened at the Turnage Theatre. The gathering was postponed because of concern for the safety of Jakub’s many friends, fans, former students, and other members of the public who were expected to attend.

The catered event is free, open to the public, and will be held this Friday at the Turnage Theater from 5:30 to 7:30 p.m. and includes access to the exhibit, which runs through February 4.

Jakub moved to Beaufort County after a distinguished career that endeared him to the fashion industry’s elite. He was creative director for Clothes Magazine and illustrated for Simplicity Patterns and Vogue Magazine, as well as freelancing for fashion houses including Hart Shaffner and Marks, Haggar, Panama Jack, and Needell’s Shoes. Jakub taught watercolor classes once he moved to town, earning a reputation as a patient, supportive instructor as well as a loyal friend and enthusiastic supporter of town events. He was easily found in a crowd because of his snappy wardrobe and widely appreciated sense of humor.

Jakub died in November after a long battle with brain cancer, just before he was to be honored at AOP’s 57th Fine Arts Show. Organizers of that show created this event, where Jakub’s work will be offered for sale, with all funds going to Jakub’s family.

The exhibit will be open during newly expanded hours at the Turnage Theater, from 2 to 4 p.m. on Tuesdays and 10am to 2p.m. from Wednesdays through Saturdays. Masks are encouraged while in the building, where sanitation stations have been added around the theater.