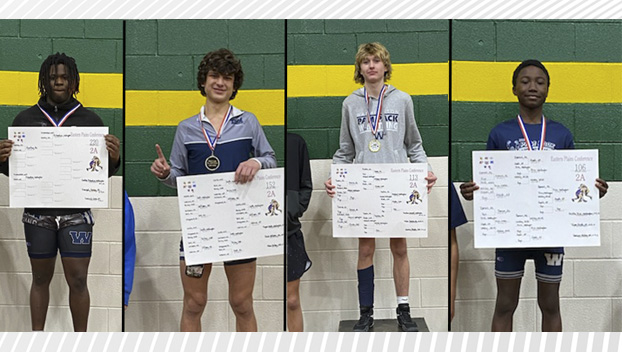 It was a big week for the Washing High School wrestling team and another important one lies ahead as post-season competition begins.

The Pack won the season long title for the eighth consecutive year to remain unbeaten during that time. They also reclaimed the tournament title after falling short during the COVID-19 delayed season last spring.

“It’s good to be conference champs again after having only 10 guys available to wrestle in it last year,” coach Chris Penhollow said. “We almost pulled it off anyway, but I’m proud of this year’s group for battling through injuries and more COVID delays to finish on top. Our four individual conference champs worked hard to earn their victories and we are looking forward to hosting the dual team playoffs Monday. It was cancelled last year because of COVID, so we are excited to have a chance to advance as a team.”

Freshman Christian Price won the conference title in the 106 lb. class as did sophomore Braxton Woolard at 113. Classmate Bryant Smith claimed the 152 lb. title and senior Jonathan Richardson prevailed at 220.

The Pam Pack will host the first and second rounds of the 2A dual team state tournament Monday night against conference opponent Ayden-Grifton at 6 p.m. North Pitt faces Manteo in the other first round match and the winners will meet later Monday evening.