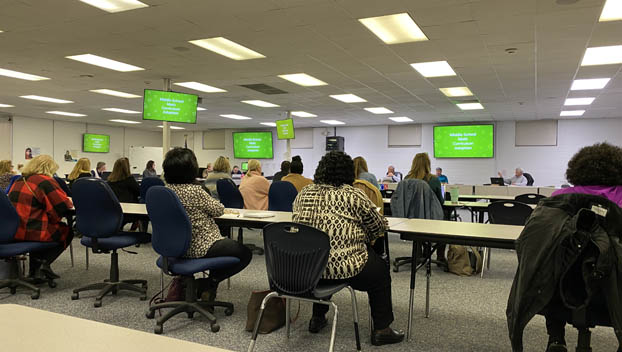 The Beaufort County Schools policy for public participation at board meetings could soon be revised so that it allows speakers to address topics that aren’t on the agenda.

“Any person wishing to address non-agenda items at a meeting is encouraged to submit a request to the superintendent to (1) place an item on the agenda for a future meeting in accordance with section A of this policy or (2) receive information regarding the appropriate grievance procedures for a complaint,” the policy reads. “The superintendent shall develop additional procedures if necessary to ensure that public comment sessions proceed in an efficient and orderly manner.”

The policy has sometimes caused confusion and frustration among speakers, most recently those who’ve shown up to discuss curriculum, COVID-19-related topics, such as masks or other items that haven’t always been on the agenda.

Board member Terry Williams mentioned that the board recently received feedback on that policy from its lawyer, Stephen Rawson.

“They came back and said that while the policy did appear to be defendable, it wasn’t a slam dunk,” Williams said. “And then there was another person that weighed in and said that the feeling was that public comments should be allowed on any subject that the board has jurisdiction over.”

Williams began his tenure on the school board in 2010. Records show the policy was revised in 2012. Williams said he doesn’t remember having discussions about the policy revision.

“I’m asking the board to consider changing this line — if there’s anything in the county they want to speak about (regarding) public schools, as long as we have jurisdiction over it, they should be allowed to speak on it. Not just whether it’s on the agenda tonight,” Williams said

Superintendent Matthew Cheeseman said the policy will be redrafted and presented for the school board’s review.

“I agree completely with Terry,” Chairman Butch Oliver said. “I think it’s the right thing to do. There could be an issue somebody has that we don’t know about and we don’t have on the agenda.”